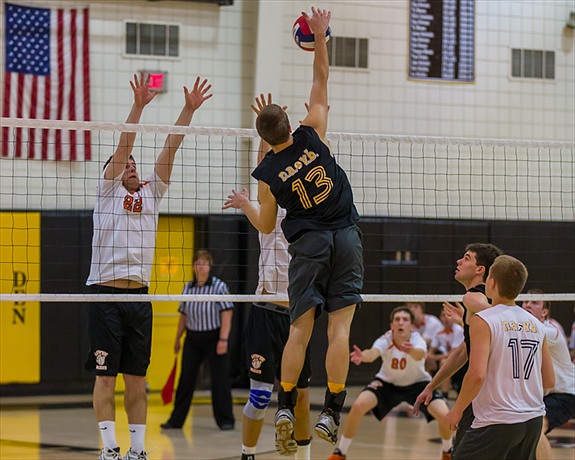 Tigers Tame Wildcats in Quarterfinal Round

The North Allegheny Boy’s volleyball team displayed a poised businesslike approach in their victory over the Greater Latrobe Wildcats in the WPIAL Quarterfinals this evening.  It was their first playoff contest of the 2014 campaign as the top seeded Tigers earned a bye in the first round. The defending PIAA and WPIAL champions surrendered one set defeating the Wildcats three sets to one.  All 3 sets that went in favor of the Tigers were by the same score of 25-17.  The one set stolen by Latrobe was by a slim 27-25 margin.

The crowd on hand at North Allegheny Senior High was electric as playoff volleyball proved to be intense.  Latrobe was the clear underdog this evening but did not go down without a fight.  For the Tigers the plan was straight forward as alluded to by Coach Schall in the pre-game interview.  They wanted to pass well and not be predictable with their sets as Latrobe brought a huge block to the match in Seniors Nathan Carota (6’7”) and Garrett Kolar (6’6”).

In set one the Tigers were led by senior David Haus who set the tempo for the evening tallying 9 kills in the first set alone.  He was supported by senior Mitch Higgins who had 5 kills, 7 assists and 2 aces along with senior Antonios Balouris who had 15 assists. The Tigers pounced out to 14-4 lead but Latrobe was able to hang around. However it seemed that Haus and Higgins were determined to put the Wildcats away as they were swinging away driving the ball through the block of Latrobe and taking the game 25-17.

Set two was just plain sloppy.  Neither team was able to put together an offensive run while the block of Latrobe seemed to be figuring out the Tigers approach.  At one point the Tigers held the largest lead of the set by either team (3 points) 17-14.  The Wildcats showed a lot of heart and hung around as both teams went back and forth finding themselves tied more often than not.  The Tigers had a set point at 25-24 but Latrobe was able to rattle of 3 straight points and take set 2 by a score of 27-25.

The next two sets would be much like the first with the Tigers getting back on track, creating separation again with their balanced attack. Higgins would lead the way in set 4 by posting 5 kills and 3 aces.  Higgins and Haus both posted 21 kills a piece on the evening. Higgins scored on 6 service aces in the match and Balouris tallied 51 total assists.  Senior Brendon Brown was the only other Tiger posting kills in double digits with 10.  Junior David Henderson exhibited his quick hands leading the way in digs for the Tigers with 11.  For his hustle, leadership and consistency David Haus was named the Wright Automotive Player of the Game.  The Tigers advance to WPIAL Semifinals where they will face Bethel Park who defeated Seneca Valley in 5 sets earlier in the first match of the evening.  That match will be Tuesday May 20th at Baldwin with the time to be determined.