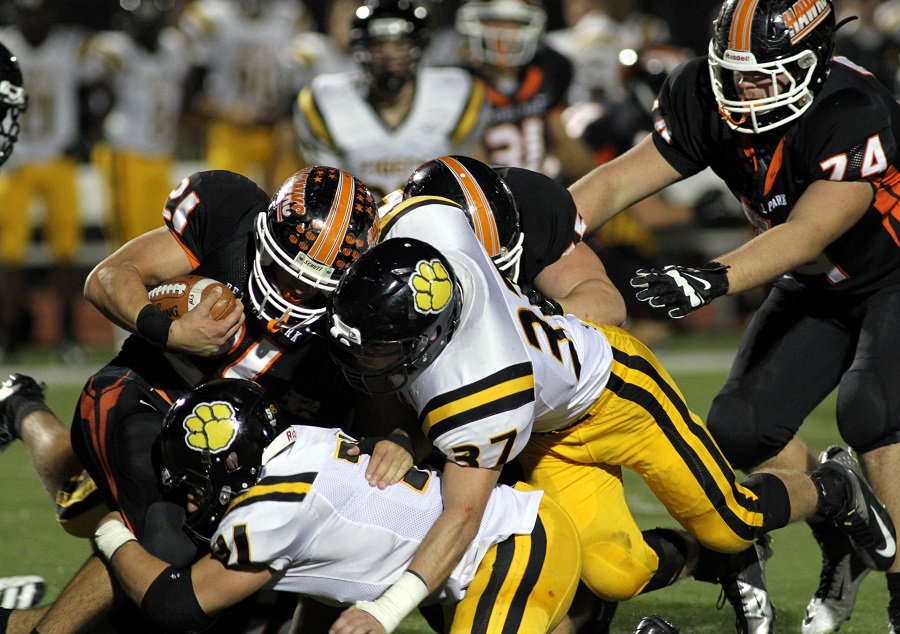 Tigers To Visit Bethel Park In Week One

Following a dominating victory over Morgantown at the Western Pennsylvania Football Classic, the North Allegheny Tigers (1-0) will take on a familiar WPIAL opponent with a visit to Bethel Park to play the Black Hawks. Electing to participate in a scrimmage last week rather than play a Week Zero game, the Black Hawks will be playing in their season opener on Friday night. This interconference matchup between the Tigers and Black Hawks will be video streamed live from Bethel Park via pay-per-view ($8.00) by the North Allegheny Sports Network. If you can’t make it to the game, you can watch the contest by clicking here.

Led by longtime head coach Jeff Metheny, the Black Hawks have been known for their consistency and fundamentally sound football. Entering his 24th season as head coach, Metheny has guided Bethel Park to 18 playoff appearances and a WPIAL title in 2008. Bethel Park is coming off a 5-5 season a year ago which ended with a quarterfinal round exit to Pine-Richland, 35-32. The season finale was a microcosm of the entire season for Bethel Park as it took a last-second field goal by the Rams to claim victory. Bethel Park lost four games last season by a touchdown or less, bringing to reality the fine line that exists between winning and losing. One of those losses was a week one defeat to North Allegheny, 21-14, in which the Tigers broke a 14-14 deadlock with a rushing touchdown by Michael Pope with 3:43 remaining in the third quarter.

While there are some question marks at the skill positions, there’s little doubt that the strength of the 2017 Black Hawks will be the line of scrimmage. Bethel Park returns all five starters on the offensive line, headlined by WVU recruit James Gmiter at tackle. Joining Gmiter at tackle is Connor Wholey who is being recruited by Ivy League schools. Guard Gavin Vargesko can bench press 330 pounds and fellow guard Dan Kwiatkoski is the younger brother of Nick Kwiatkoski who currently plays linebacker for the Chicago Bears. At center is senior Liam Williams and David Opferman is a returning starter at tight end.

Clearly the line of scrimmage is expected to be a focal point for Bethel Park on a weekly basis, but who will operate behind the line is still a mystery. A spirited preseason battle at quarterback has ensued between senior Carmen Esposito, junior Luke Surunis and sophomore Anthony Chicitt. Whoever gets the start under center on Friday night will try to replace southpaw quarterback Cole Rodgers who performed admirably last season. The most experienced skill player for Bethel Park is senior John Doleno who rushed for 265 yards and caught 15 passes for 259 receiving yards. Doleno was used as a slotback last season and scored four total touchdowns. Bethel Park will need to make up the offensive production left behind by former running back Terron Murphy who posted back-to-back 1,000-yard seasons over the last two years.

If there were any question marks about the North Allegheny quarterback position heading into last week’s game, senior Luke Trueman turned those question marks into exclamation points with a fabulous debut in his first varsity start. Trueman keyed the 45-0 rout of Morgantown with 165 yards passing, 56 yards rushing and three total touchdowns en route to Wright Automotive Player of the Game honors. Last week’s contest was a complete victory for the Tigers with the defense limiting Morgantown to only 83 total yards of offense and just five first downs. The shutout was NA’s first since posting a 49-0 whitewash at Shaler on September 19, 2016. Senior Alex Hays was the top tackler against Morgantown with six stops and one sack. The NA special teams chipped in as well courtesy of a Joey Porter Jr. 46-yard punt return touchdown.

Kickoff for North Allegheny’s non-conference battle with Bethel Park is slated for 7:30 p.m. in the south hills. The game will be broadcast and video streamed live by the North Allegheny Sports Network. Randy Gore and Rick Meister will have the call.