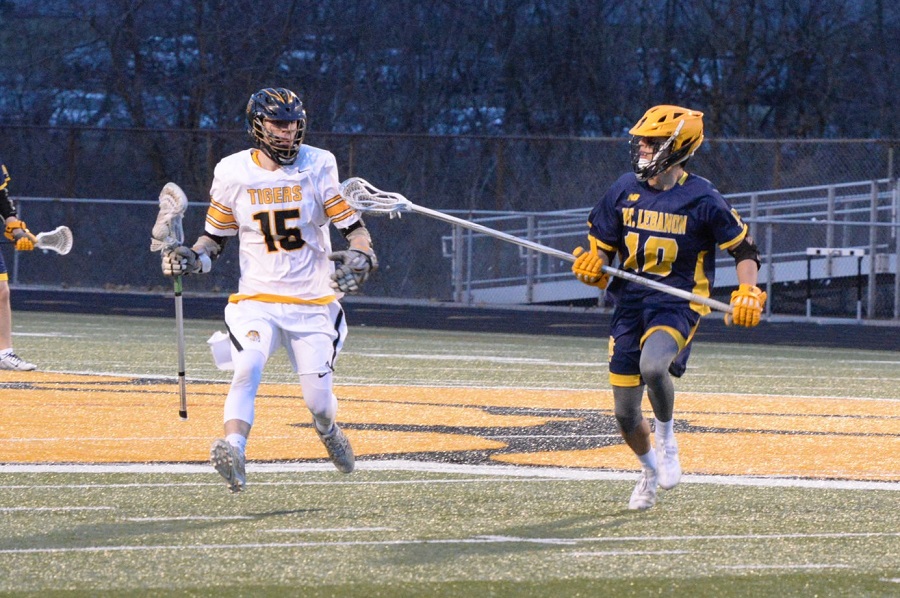 It was described as a “measuring-stick” matchup in pregame banter, as two of the best teams in WPIAL Lacrosse squared off a Newman Stadium Thursday night.

North Allegheny beat Mt. Lebanon 8-6 in a matchup that included plenty of energy and grit from both sides.

The Tigers opened up the scoring off the familiar hands of a post-season hero from the 2018 campaign. Senior Matt Osten broke the scoreless tie with 11:32 left in the first quarter. Sophomore Ben Rohan added a tally at 10:19 to extend the Tiger lead to 2-0.  Mt. Lebanon responded with a pair of goals with less than five minutes to go in the first, but Rohan struck again with just 1:41 left in the frame to give NA the 3-2 lead.

In the second quarter, the Tigers added to the score with goals from senior Kyler Byerly and junior Isaiah Davis, as NA went into halftime with a 5-2 lead.

The Blue Devils responded in the third quarter with back-to-back goals from Blake Nelson and John Sramac, cutting the lead to 5-4. Osten notched two additional goals at 5:30 and 0:35, the second on a man-up opportunity as the Tigers held a 7-4 lead.

In the fourth quarter, Davis scored his second of the game on the man advantage to extend the Tiger lead.  Davis almost had a hat trick night, as he pushed his way down the left alley and threw a pass from Byerly behind his back for a spectacular goal that was waived off because of a man in the crease violation.  Mt. Lebanon scored on a late man-up opportunity with 3:35 left off the stick of Jack Sullivan, and the Tigers accidentally planted a goal in its own net 30 seconds later to trim the lead to 8-6.  NA drained the clock from that point and escaped with a big victory.

Osten earned Wright Automotive Player of the Game honors with his hat trick and hard play throughout the game.

The Tigers improve to 2-0, 1-0 on the season. North Allegheny takes on Shaler at home in a section matchup on Tuesday, April 2.

The Blue Devils fall to 1-1 on the year and take on Peters Township on the road Monday, April 1.