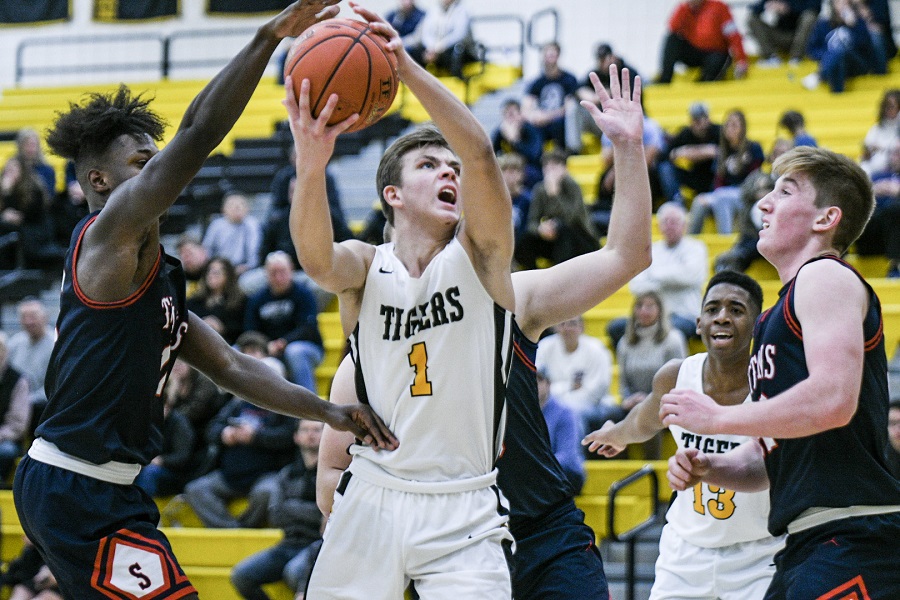 Facing the fourth-ranked team in Class 5A, the North Allegheny Tigers defeated the Shaler Titans on Friday night, 54-38. The Class 6A Tigers flustered the Titans with a feisty team defense that limited Shaler to 33-percent shooting (16 of 48) from the field.

One of the catalysts on defense was senior Luke Colella who was matched up throughout the night with Shaler standout guard, Mekhi Reynolds. While Reynolds finished with a game-high 19 points, he was inefficient and connected on just 8 of 24 from the field and 1 of 6 from beyond the arc. Adding 14 points on offense, Colella was named the Wright Automotive Player of the Game by the North Allegheny Sports Network.

Renewing a neighborhood rivalry in this non-section contest, North Allegheny and Shaler battled in a back-and-forth first half that concluded in a 21-21 tie. The Tigers turned the tables on the Titans in the third quarter by outscoring their former archrival 16-4 in the period. Limiting Shaler to 2 of 11 shooting in the third quarter, the Tigers dominated the defensive glass and quickly converted their rebounds into transition buckets. Constantly beating Shaler to the rim, North Allegheny built a 37-25 lead heading into the fourth quarter and held a double-digit advantage for the remainder of the game. The Tigers shot 75-percent from the field in the second half (12 of 16).

Making his season debut, junior forward Khalil Dinkins controlled the paint with four rebounds and two blocks. Dinkins added eight points and one thunderous dunk to provide an exclamation point on the victory.

Also making an impact on the inside was senior Grant Timmerson who finished with 11 points and a block. Junior guard Greg Habib matched Colella for the team lead in points with 14, scoring 12 in the second half.

For Shaler, joining Reynolds in double figures was senior Nick Rispoli with 10 points and 10 rebounds.

With the win, North Allegheny improves to 2-2 on the season, while Shaler dips to 3-1 overall with its first loss. The Tigers will take on Altoona on the road at 6:30 p.m. on Saturday.