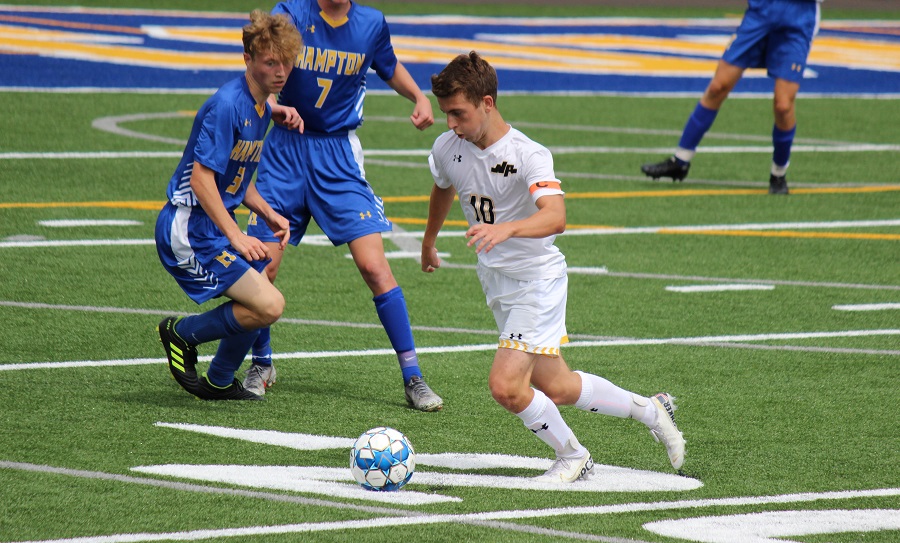 The North Allegheny Boys Soccer team opened the season on the road at Hampton High School this year with a solid 3-2 victory over the host Talbots.  As the Tigers departed the bus, they soon learned of a start time change that forced the varsity team to begin their 2019 quest to “Own The Pitch” sooner than expected.

The Tigers controlled action early and had a quality chance generated though a nice cross from the left wing by senior forward/defender Jonathan Ross that found sophomore forward Evan Anderson in tight, however the shot was pushed slightly wide right of the goal.  Shortly after a change of possession senior midfielder Matt Van Kirk, struck a clean shot from slightly beyond the 18’ that sailed ever so slightly above the upper right edge of the crossbar.  At 28:32 of the first half the Tigers were delivered a quality scoring chance when a Hampton defender was called for hand ball within the penalty area.  Senior forward Will Cinker took the PK for NA and promptly buried it high left, beyond the outstretched reach of the Talbot goalkeeper for a 1-0 lead.

At 15:14 remaining in the first half, Hampton evened up the score at 1-1 when sophomore forward Liam Nichols found his way behind the Tiger defense generating a one-on-one and beat senior goalkeeper Jonathan Partridge with a well-placed shot that found the back of the net.

After some halftime lineup tweaks by the coaching staff, the Tigers came out on fire to start the second half, dominating possession for most of the half.  After several opportunities deep in the Talbot end, at 33:34 of the second half the Tigers found themselves back on top.  Senior forward Luke Anderson worked his magic, splitting multiple Hampton defensemen and then delivered a well-placed cross to senior forward Sam Maldia who found himself on the doorstep of the goal. Maldia fought off his mark and buried the second goal of the day for a 2-1 NA lead.

Five minutes later, senior forward Sam Passodelis used both speed and strength to beat his defender deep in the Hampton right end to deliver a perfect cross in the box that found Cinker who quickly finished with a jumping right-footed volley that went high center, giving him his second goal of the match, and the Tigers a 3-1 advantage.

At 27:52 of the second half, a goalkeeper substitution was made by NA when junior GK Mikkel Hindsbo replaced Partridge.  With the Tigers continuing to control most of the possession time the rest of the way, Hampton was able to tally another score at the 5:20 mark, making the score 3-2 that held up as the final.

There was strong defensive play all match long on the backline by seniors, Samuel Gianetti, Jason Roman, Ryan Schwartz and juniors Jonathan Swan, Zoha Petersen and Owen Smith, which kept the Tigers well in control of this season opener.

The Tigers travel to Cupples Stadium on the South Side for their first section game vs. Allderdice, Tuesday at 7:00 PM.