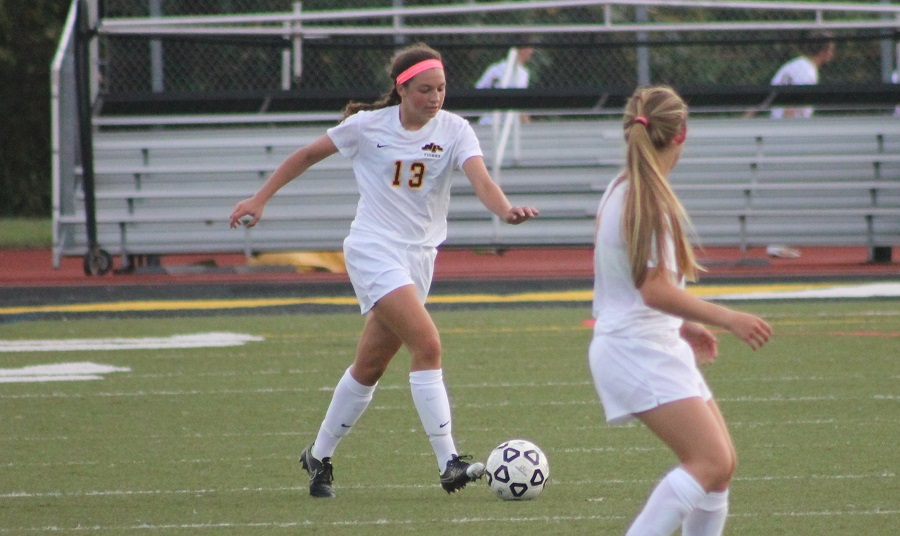 Lady Tigers Tripped Up By Raiders, 3-1

Caroline Miller’s hat trick lifted the Seneca Valley Raiders to a 3-1 win over the North Allegheny Lady Tigers on Thursday night at Newman Stadium. The victory was the 29th in a row against WPIAL opponents for the Raiders. The last WPIAL team to defeat Seneca Valley was North Allegheny on September 21, 2013 by a 1-0 decision.

The Tigers nearly shocked the two-time reigning WPIAL champions in the first 30 seconds of the game when junior Brooke Anderson broke free for a shot on net but Seneca Valley goalie Delany Lisco made the save to keep NA off the board. Following that quick jolt by North Allegheny, the Raiders maintained constant pressure that developed into eight corner kicks in the first half. It was the fourth corner kick of the night that proved to be fruitful as Miller scored the game’s first goal with 28:20 to go in the first half and put the Raiders on top, 1-0.

The score stayed 1-0 until 23:44 in the second half when Raiders midfielder Morgan Hoffman was fouled in the box resulting in a penalty kick. Miller took the penalty kick for SV and booted the ball past NA goalie Cara Schwartz for a 2-0 lead.

The Tigers received a penalty kick of their just over two minutes later when Morgan Anderson was tripped up in the Seneca Valley box. Senior Marina Thornton drilled the penalty kick into the back of the Raiders net to cut the score to 2-1, Seneca Valley. For her efforts, Thornton was named the Wright Automotive Player of the Game.

The Raiders, who finished the night with a 16-2 advantage on corner kicks, sealed the win with another Miller goal off a corner with 10:41 remaining in the game to vault the two-time reigning WPIAL champions to a 3-1 victory.

North Allegheny drops to 1-1 overall and 0-1 in Section 2-AAA following the loss. Seneca Valley improves to 2-0 overall and 1-0 in section play. The Lady Tigers hope to bounce back tonight with a contest at Hampton. The match is slated for 6:30 pm.