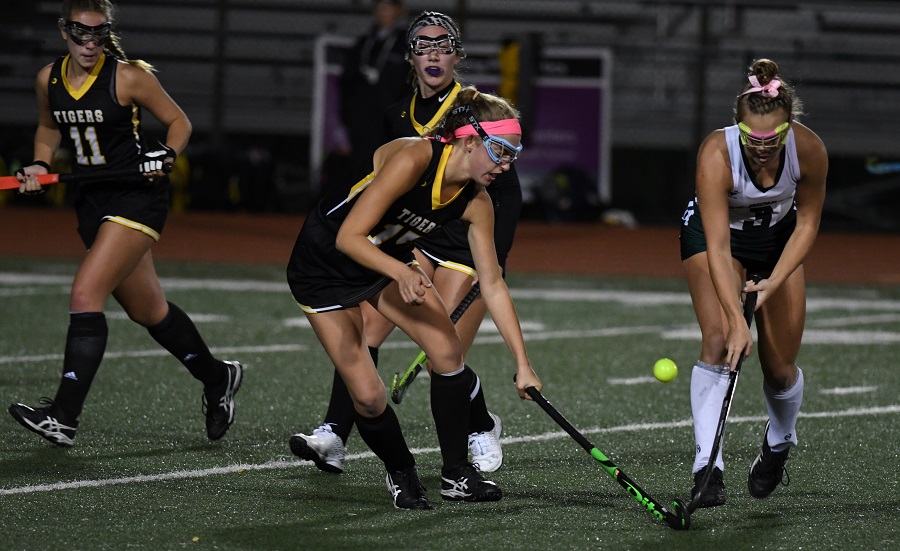 The Pine-Richland Rams advanced to the WPIAL Class AAA championship for the fourth straight season with a 3-0 victory over the North Allegheny Tigers on Wednesday night in Gibsonia.

It was the third consecutive year the Tigers and Rams met in the WPIAL playoffs. Last season, Pine-Richland narrowly edged NA in a 3-2 penalty stoke shootout. Hoping to atone for last year’s defeat, the Tigers were unable to contain the Rams in the early going.

Pine-Richland netted the first goal just 3:54 into the contest when junior Ella Rottinghaus streaked down the left sideline and sent a hard centering pass on to the stick of Riley Kirby for a goal and 1-0 lead. Not long after, freshman Mary Wymard deflected a pass from Ava Loskoch into the NA net with 23:29 to play in the first half for a 2-0 Pine-Richland advantage.

Following Pine-Richland’s opening surge, the Tigers settled into the game a drew four penalty corner opportunities in the first half. Many of the penalty corners were earned by senior Hailey Wachowiak. The Tigers were unable to cash in on their penalty corner tries, however, and the game remained 2-0, Rams, at intermission.

In the second half, NA played even with Pine-Richland for most of the half until the Rams got a lucky bounce that iced the game. With 8:01 left in regulation, Rottinghaus fanned on a shot near the baseline that appeared headed out of bounds. Instead, the ball stayed inbounds and spun across the goal line and into the NA net for a 3-0 Pine-Richland lead and victory.

The outcome propels Pine-Richland into the WPIAL championship game against Peters Township on Monday night at 6:00 p.m. from Fox Chapel High School.

North Allegheny’s season comes to a close with a 7-11-1 overall record. Congratulations to head coach Michelle Couch, the coaching staff and the entire NA team for another remarkable season and playoff appearance in 2019.