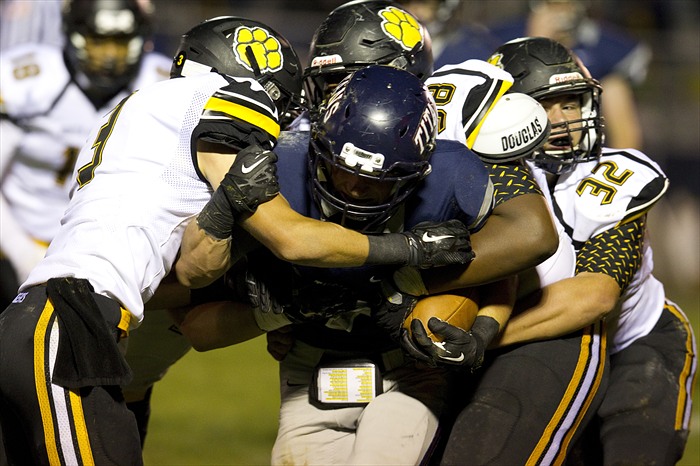 North Allegheny used a big-play attack to topple the Shaler Titans on Friday night, 41-14, in a Northern Eight Conference contest. Three of North Allegheny’s scoring plays came from over 30 yards out and were exemplary of the Tigers quick-strike ability.

The night began with one of NA’s signature big plays as senior Matt Sell took the opening kickoff 61 yards to the Shaler 23-yard line. The Tigers turned the good field position into points thanks to a 21-yard field goal by Seth Mancuso for a 3-0 lead with 8:46 on the first quarter clock.

After a three and out by Shaler, the Tigers took only two plays to score on their next possession as senior quarterback Riley Trueman hurled a 54-yard touchdown pass to Sell for a 10-0 lead. The Trueman to Sell connection came through again in the early stages of the second quarter on a 31-yard scoring strike to bring the score to 17-0, Tigers. For his two touchdown passes, Trueman was named the Wright Automotive Player of the Game.

With Shaler punting deep in its own territory later in the quarter, the snap from center went high over punter Nick Fugh and through the back of the end zone for a safety and a 19-0 North Allegheny lead. On the ensuing possession, the black and gold capped a 60-yard drive with a 3-yard touchdown run by senior Jake Longwell. The Tigers tacked on a two-point conversion pass from Ethan Maenza to Niko Mermigas for a 27-0 advantage with 2:40 to play before halftime.

Shaler’s next drive was cut short when quarterback Hunter Zukowski was sacked by linebacker Francis Duggan and fumbled the football at the NA 48-yard line. Senior Jacob Fritsch recovered the gift from Zukowski and the Tigers offense needed only one play to score as Maenza heaved a 52-yard scoring pass to Mermigas for a 34-0 lead with 50 seconds left in the second quarter.

After halftime, the Tigers defense forced another Shaler turnover as defensive back Quenten Sansosti intercepted a Zukowski pass and returned it 24 yards to the Titans 2-yard line. On the next play, Longwell plunged into the end zone for his second touchdown run of the game and a 41-0 North Allegheny lead with 10:46 to go in the third quarter.

The Longwell touchdown invoked the mercy rule and the Tigers cruised to the win from there on out. Shaler did score a couple of fourth quarter touchdowns as Jake Hartman delivered a 2-yard touchdown run and Nick Fugh threw a 65-yard touchdown pass on the final play of the game to Killian Bozzo to bring the final score to 41-14, North Allegheny. For a look at the total game stats, click here.

With the win, North Allegheny improves to 4-1 overall and 3-1 in the Northern Eight Conference. Shaler falls to 1-4 overall and 1-3 in conference play. The Tigers will host the Butler Golden Tornado next week on homecoming night from Newman Stadium.