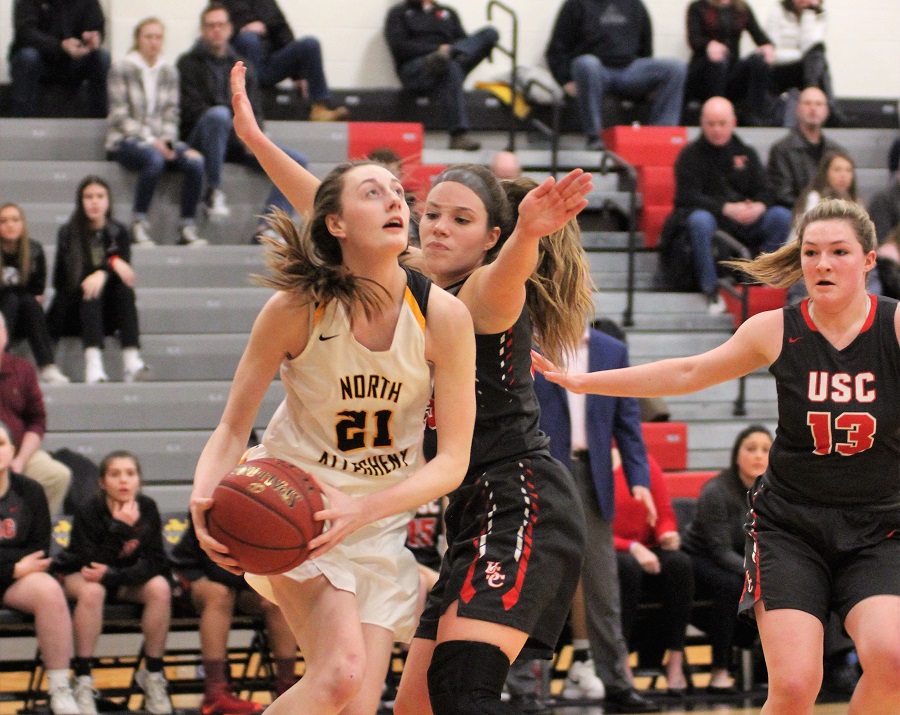 For the second time this postseason, the North Allegheny girls’ basketball team defeated the Upper St. Clair Panthers by a 46-21 decision in the opening round of the PIAA playoffs. The Tigers and Panthers met just two weeks ago in the WPIAL quarterfinals with NA claiming a 45-26 victory.

Upper St. Clair was making its first state tournament appearance since the 2011-2012 season and were going toe-to-toe with the undefeated WPIAL champions. Using a methodical pace with a four-corner offensive approach, the Panthers slowed things down in the first quarter and held an 8-7 lead through eight minutes of play.

The Tigers defense took hold in the second quarter and forced the Panthers into 11 turnovers to take a 19-12 lead by intermission.

With Upper St. Clair taking the air out of the basketball in the first half, the Tigers did very little offensively. In the second half, however, North Allegheny took wing from beyond the arc and put the game away during a dominant third quarter.

Leading 19-13 early in the third, the Tigers used an 8-0 run, keyed by two 3-pointers from senior Courtney Roman, for a 27-13 advantage. Finishing with nine points and sparking a 3-point barrage in the second half, Roman was named the Wright Automotive Player of the Game. After shooting just 1 for 9 from beyond the arc in the first half, the Tigers knocked down 6 of 12 on 3-pointers in the second half.

Following an Upper St. Clair time out, the Tigers continued to pour on the points and outscored the Panthers 17-3 in the third quarter for a 36-15 lead. The most devastating blow was delivered by senior Piper Morningstar who drained a deep 3-pointer before the third-period buzzer. Morningstar totaled a game-high 18 points with three treys on the night. Also, finishing in double figures was freshman Lizzy Groetsch with 11 points.

The Tigers went into cruise control in the fourth quarter and finished off the Panthers for a 46-21 triumph. The NA defense limited Upper St. Clair to 26-percent shooting (7 for 27) from the field.

North Allegheny improves to 26-0 on the season and will take on the Altoona Mountain Lions Tuesday night at a site and time to be determined. The North Allegheny Sports Network will broadcast the game live via the internet. Upper St. Clair, meanwhile, concludes its season with a 13-11 mark.