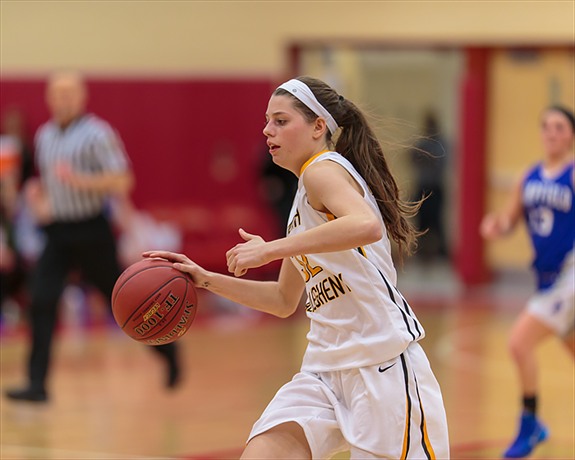 Senior Monica Burns scored a game-high 23 points and helped lift the Hempfield Spartans to a 60-44 win over the North Allegheny Lady Tigers in the WPIAL Semifinals on Tuesday night from Penn Hills High School. The loss snaps a 21-game winning streak for the top-seeded Lady Tigers and sets up an all Section 1 final between the Spartans and Penn-Trafford Warriors on Saturday at the A.J. Palumbo Center.

As they have throughout the post-season, Hempfield leaped to an early lead against their opponent, opening up a 13-2 first quarter advantage over the Tigers.  The lead swelled to 16 points in the second quarter courtesy of a well-balanced Hempfield attack. Leah Knizner, Lexi Irwin, and Samantha Orie all netted six points apiece in the first half as Burns was more of a facilitator with her terrific passing. In the second half, Burns pumped in 15 points and held off the Tigers press with her adept ball handling.

Trailing 40-20, North Allegheny built a third quarter charge and an 8-0 run to trim the deficit to 40-28 with over three minutes to play in the period. Junior Meg Morningstar came through with big minutes off the bench and finished the night with a team-high 12 points and corralled eight rebounds for the Tigers. For her efforts, Morningstar was named the Wright Automotive Player of the Game.

The third quarter surge was not enough for NA however, as foul trouble for several key Tigers and Burns’ hot shooting quickly swayed the momentum back in the Spartans direction. Hempfield rolled in the fourth quarter for the 60-44 victory.

Joining Burns in double figures was Knizner who finished with 12 and Irwin who tallied 10.  For North Allegheny, along with Morningstar’s 12 points, sophomore Taylor Lake added 11 and 10 rebounds for a double-double.

North Allegheny falls to 22-2 on the season and will await its first round opponent in the PIAA tournament which starts next week. Hempfield improves to 17-8 on the campaign and will continue their post-season run against the Penn-Trafford Warriors in the WPIAL Championship on Saturday.

For a photo gallery of the game by J.J. LaBella, click here.