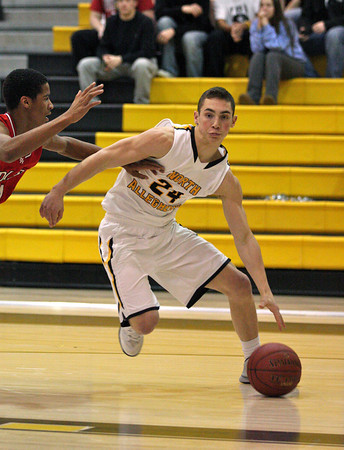 Similar to their meeting at New Castle on January 10, the Hurricanes raced to a double digit lead with a 17-3 spurt to start the game and held a 21-7 advantage midway through the second quarter.  However, North Allegheny weathered the early storm from the Hurricanes and evened the score with a 14-0 run. Junior Cole Constantino and senior Elijah Zeise scored four points apiece during the NA run, and senior Joe Mancini tied the game with his specialty, a three-pointer with 1:25 to go before halftime.  New Castle’s Malik Hooker and Anthony Richards answered with back-to-back buckets to regain the lead at 25-21.  North Allegheny senior David Haus dropped in a terrific spinning layup before the buzzer to bring the score to 25-23, New Castle, at the half.

In what has become typical during the course of their winning streak, the Red Hurricanes blew open a close game in the second half with a consistent flow of points and pressure, constructing a 45-33 lead by the end of three periods.  Thanks to Hooker, an Ohio State football recruit, and Richards, New Castle was able to put the game away in the final 16 minutes. Hooker finished with a game-high 19 points and 13 rebounds, while Richards added 13.  Richards did most of his damage at the free-throw line by going 8 of 9 from the stripe. Twin brothers Stew and Drew Allen added 14 and 11 points, respectively.

Also making an impact for the Tigers was Zeise who finished with 13 points and Haus who netted nine points and pulled down a team-best nine rebounds.

North Allegheny falls to 16-3 overall and 10-3 in Section 3.  New Castle, who has already locked up a section crown, improves to 20-0 overall and 13-0 in section play. The Tigers will visit North Hills on Friday while New Castle hosts Hampton.