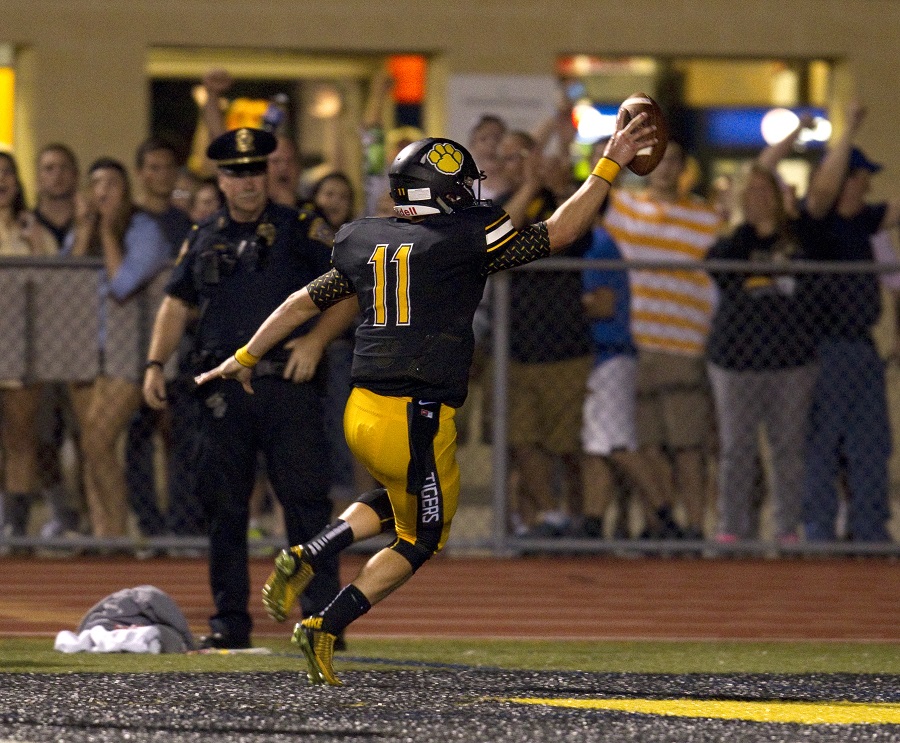 Riley Trueman’s 28-yard touchdown run with 35 seconds remaining propelled the North Allegheny Tigers to a 24-17 upset victory over the top-ranked Central Catholic Vikings on Friday night at Newman Stadium. The touchdown was one of two rushing scores on the night for Trueman and was part of a fourth quarter that saw the Tigers churn up 127 yards of offense against the highly touted Vikings defense.

While it was a thrilling finish for the black and gold, the evening began ominously as the Tigers fumbled on their first offensive play in the opening stanza. Three plays later, Central Catholic scored on a 19-yard touchdown pass from Troy Fischer to Jacob McKee for a 7-0 lead.

After totaling a negative-six yards of offense in the first quarter, North Allegheny finally found their legs in the second quarter and tied the game on a 10-play, 43-yard drive that was punctuated by a Michael Pope 1-yard touchdown run. The Pope scoring run, his fourth of the season, evened the score at 7-7 with 8:13 to play before halftime. Central Catholic regained its lead before intermission when Fischer hit quick-footed receiver Bricen Garner in stride with a 51-yard bomb to bring the score to 14-7, Vikings, with 1:11 to go in the second quarter.

In the second half, North Allegheny wore down the Central Catholic defense with two lengthy drives. On their first possession of the half, the Tigers ate up 73 yards on eight plays before stalling at the Vikings 6-yard line. Senior Seth Mancuso put points on the board with a 23-yard field goal to cut the Central Catholic lead to 14-10 with 9:37 to play in the third quarter. 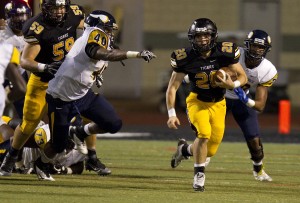 Running back Nick Provenzano runs away from the Central Catholic defense.

Following a Vikings punt, North Allegheny took over at its own 28-yard line. Three runs by senior Nick Provenzano, including a 31 yard tote, covered 43 yards and carried NA to the Vikings 29-yard line. Five plays later, Trueman punched the ball in the end zone on a 2-yard touchdown run to give NA its first lead of the night at 17-14 with 11:24 on the clock in the fourth quarter.

The Vikings began their ensuing possession with a 50-yard run by Garner on a sweep that took CC to the North Allegheny 35-yard line. Central Catholic reached the NA 5-yard line before a holding penalty and two incompletions forced the Vikings to settle for a 33-yard field goal from Jacob Rocchi that evened the score at 17-17 with 7:21 remaining.

After a punt by each team, North Allegheny took possession at its own 27-yard line with 4:17 remaining for what proved to be the game winning drive. It appeared the Tigers might strike quickly as quarterback Ethan Maenza raced 58-yards to the Vikings 15-yard line, however, the majority of the run was nullified on a holding penalty and sent NA back to its own 31. Undaunted, the Tigers continued their march primarily on the strength of Maenza. The junior carried the ball six times on NA’s final drive for 37 yards. Faced with a 3rd and 1 at the Central Catholic 28-yard line, Trueman got the call and not only got the first down but raced to the end zone for the go-ahead touchdown, giving the Tigers a 24-17 lead with 35 seconds left to play.

The North Allegheny defense, which played a tremendous ballgame from start to finish, held off a desperation drive by Central Catholic in the game’s waning seconds as the Tigers held on for a 24-17 upset of the 22nd-ranked team in the nation. Proving pivotal to NA’s efforts on defense was sophomore Francis Duggan who tallied 16.5 tackles and three sacks. Duggan was named the Wright Automotive Player of the Game by the North Allegheny Sports Network.

After being held in check in the first half, the Tigers offense gained 266 of their 333 total yards in the second half with the majority of that amount coming on the ground. North Allegheny produced two 100-yard runners in the game as Maenza collected 122 yards rushing and Provenzano added 103 yards.

For Central Catholic, Fischer completed 11 of 22 passes for 199 yards and two touchdowns. Garner accounted for 133 total yards, 50 rushing and 83 receiving.

North Allegheny improves to 2-1 overall and in the Northern Eight Conference. Central Catholic drops to 2-1 overall and 1-1 in conference play. The Tigers visit the Upper St. Clair Panthers next week in their first non-conference game of the season. For a look at the game’s final statistics, click here.