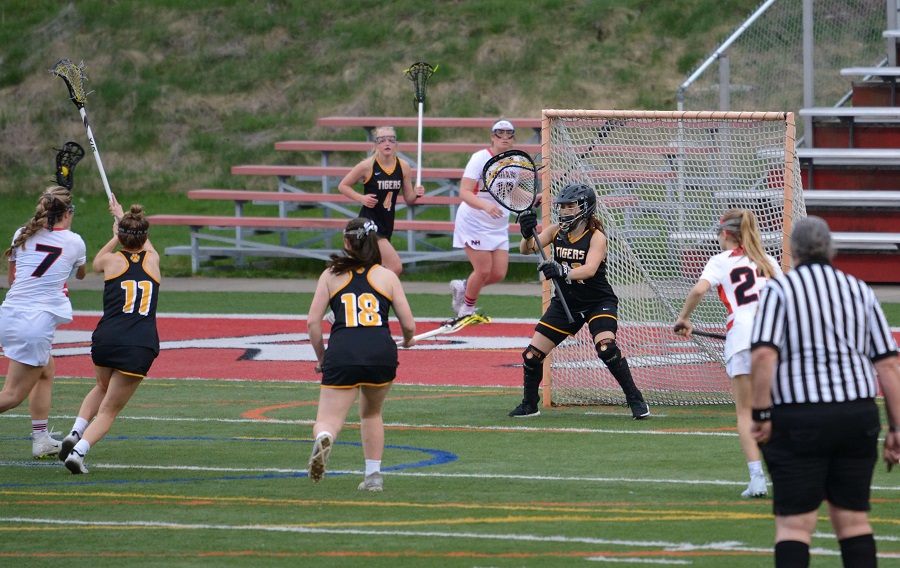 The North Allegheny girls’ lacrosse team won its fourth consecutive game on Thursday night with a 21-7 victory over the North Hills Indians at Martorelli Stadium in Section 2-AAA action.

The Tigers held a 10-5 lead at the half and ran away with the game with an avalanche of goals that buried the Indians in the second half. Leading NA’s scoring bonanza were seniors Skye DePrado and Lola Wilhite with nine and seven goals, respectively.

Senior Katie Oates sparked the offense as well with a goal and three assists. Sophomore midfielder Mila Prusak helped facilitate the scoring with three assists of her own. Other goal scorers for the Tigers included Allison Lyon, Emma Lafayette, Bella Falo and Alyssa Redshaw, all netting one marker each.

North Hills was paced by Mya Bolinda’s four-goal first half, but Bolinda and Indians were shut down in the second half by the play of Lyon and Leigh Failla on defense over the final 25 minutes of play.

With the win, North Allegheny improves to 4-1 overall and 2-0 in Section 2-AAA. North Hills falls to 2-2 overall and 0-2 in the section. The Tigers look to keep things rolling on Tuesday night with a home matchup with Moon at 6:00 p.m. The game will be broadcast live by the North Allegheny Sports Network.