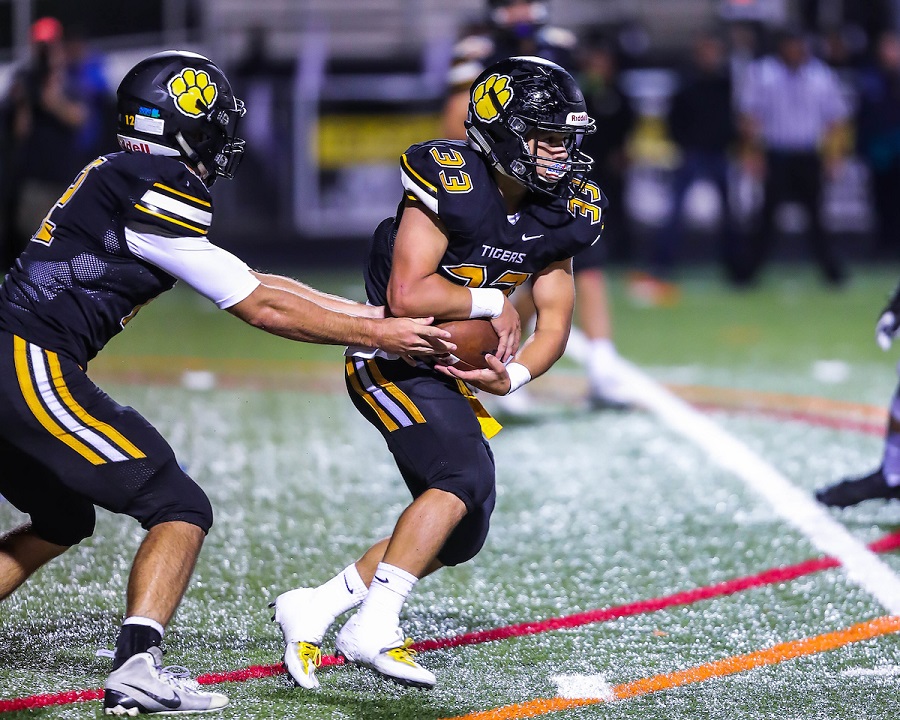 North Allegheny locked up a playoff berth in convincing fashion on Friday night with a thorough beating of the Seneca Valley Raiders, 49-14, in Northern Seven Conference play. The Tigers churned out 518 total yards and 325 yards on the ground in a dominating performance by the offensive line. Senior running back Mike Pope was the primary benefactor from the running room provided and toted the football 21 times for 147 yards and two touchdowns. Displaying nimble feet, and running with power when necessary, Pope was anointed the Wright Automotive Player of the Game.

The NA rushing attack made its presence felt on the first drive of the football game as the Tigers ate up over six minutes and 75 yards on the opening possession. The lengthy drive concluded on a 1-yard QB keeper by Ethan Maenza for a 7-0 lead with 5:42 remaining in the first quarter.

Seneca Valley’s first possession took the Raiders to the NA 20-yard line before a turnover on downs gave the Tigers the football back. This time, North Allegheny drove 80 yards in nine plays and culminated the drive early in the second quarter on a 5-yard score by Pope for a 14-0 lead.

After a three-and-out by the SV offense, the Tigers quickly added on to their lead with a four-play drive that was capped on a 25-yard touchdown pass by Maenza to Niko Mermigas for a 21-0 advantage with 7:36 on the second-quarter clock. Another three-and-out by the Raiders gave NA the football right back and the next Tigers possession ended with a 15-yard rushing score by Pope for a 27-0 lead with 3:56 to play in the second quarter. The Tigers missed the extra point following the Pope score.

Seneca Valley picked up a little bit of momentum with a 22-yard rushing touchdown by senior quarterback Jack Cook to trim the NA lead to 27-7 with 36 seconds remaining before intermission.

The Raiders, who rallied from an 18-point deficit the week before for a win at Bethel Park, hoped to cut into the Tigers lead additionally on the opening drive of the third quarter. However, North Allegheny senior lineman Josh Lugg separated Seneca Valley tight end Jacob Holl from the football at the SV 45-yard line and NA linebacker Cade Hoke recovered to bring the drive to a screeching halt. The Tigers promptly took advantage of the turnover and scored soon after courtesy of a 2-yard rushing touchdown by Maenza to bring the score to 33-7, Tigers, with 5:06 to go in the third quarter. North Allegheny added a two-point conversion pass from Luke Trueman to Andrew Turzai for a 35-7 lead.

With North Allegheny’s offense rolling along, the Tigers were forced to punt only once on the night. However, that punt was blocked and returned by Cook for a 25-yard touchdown on the last play of the third quarter and the NA lead was cut to 35-14. That was the only hiccup on the night for the Tigers as the black and gold continued to run roughshod over the Raiders and scored two more touchdowns in the fourth quarter. Mermigas hauled in a 68-yard touchdown pass from Maenza and Dom Falo scored on a 23-yard touchdown jaunt to bring the final score to 49-14, North Allegheny.

Along with Pope’s big night, Maenza passed for 193 yards and rushed for 73 yards on 14 carries with four total touchdowns. Mermigas pulled down five receptions for 134 yards and two touchdowns.

The win, North Allegheny’s fifth in a row, improves the Tigers record to 6-2 overall and 4-1 in the Northern Seven Conference. Seneca Valley dips to 4-3 overall and 2-3 in conference play. North Allegheny hits the road in week eight with a visit to Hempfield in a non-conference matchup next week.