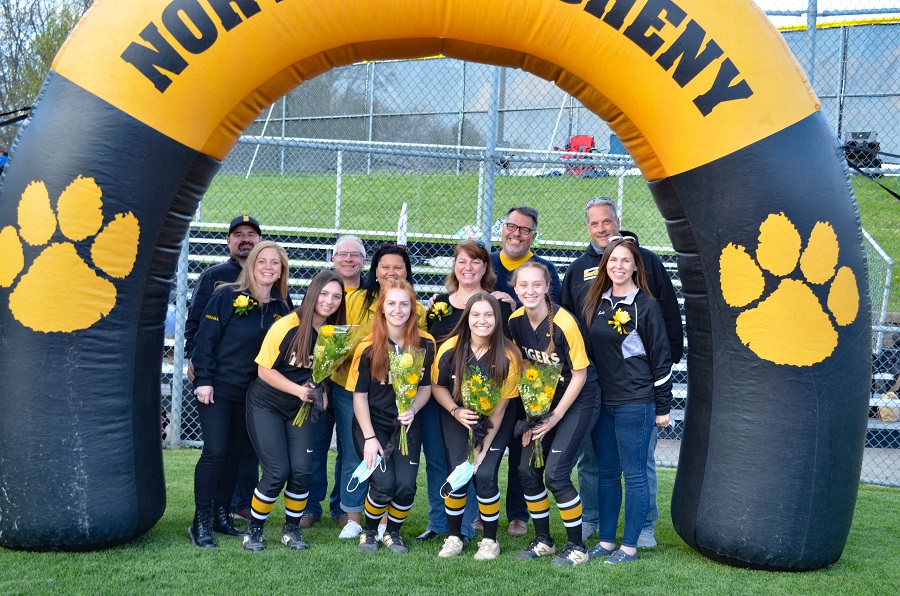 Junior Alaina Whipkey scored on a Butler throwing error in the bottom of the ninth to propel North Allegheny to a 5-4 walk-off win in extra innings on Friday night. The Section 2-6A win is North Allegheny’s fifth in the last seven games and extends the team’s head-to-head winning streak over Butler to 26 in a row.

The upstart Tornado took advantage of two Tiger errors in the top of the third inning to grab a 4-0 lead. Makenna Negley and Kaela Malis chipped in with RBI singles as part of the Butler four-run frame.

North Allegheny immediately answered back for two runs in the bottom of the third inning. Sophomore Meghan McDonough led off the inning with a single, advanced to second on an error and moved to third on a wild pitch. On senior night, senior outfielder Lauren Haywood drove in McDonough with an RBI groundout, trimming the deficit to 4-1. An out later, Whipkey belted a solo home run cutting the score to 4-2, Tornado. Whipkey’s home run was her sixth on the season, making her the first Tiger to hit at least six home runs in a season in 16 years. In 2005, Sam Goettmann and Nicole Lenart hit nine and seven home runs, respectively. Both Goettmann and Lenart are in the North Allegheny Athletic Hall of Fame.

The Tigers continued their comeback bid in the bottom of fourth inning when McDonough drove in Mayson Brokos with an RBI single, whittling the Butler lead down to 4-3. In a precursor of things to come, sophomore Annalynn Isaacs put a ball in play in the fifth inning that was promptly thrown away by the Butler infield, allowing Whipkey to race home and tie the score at 4-4.

Both teams had their chances to score the go-ahead run over the next three innings but neither could cash in. In the top of the ninth, Butler had its best chance to reclaim the lead with runners at second and third with one out. Emily Makepeace hit a fly ball to shallow center field that was tracked down by the speedy McDonough for the inning’s second out. Negley tagged from third and tried to score on the fly out, but McDonough rifled a strong throw home and NA catcher Sydni Junker tagged out Negley for a dramatic inning-ending double play and the score remained deadlocked.

To go along with her outstanding defensive play in centerfield, McDonough reached base five times, going 4-for-4 with four singles, a walk, a stolen base, an RBI and a run scored. For her efforts, McDonough was named the Wright Automotive Player of the Game.

In the bottom of the ninth, Whipkey led off the inning with a double. Similar to the fifth inning, Isaacs put a ground ball in play that the Butler defense threw away at first base, allowing Whipkey to score the game-winning run and lifting North Allegheny to an exciting 5-4 triumph.

With the win, North Allegheny improves to 6-6 overall and 3-2 in Section 2-6A. Butler drops its ninth consecutive game, falling to 1-9 overall and 0-5 in the section. The Tigers return to section play on Monday night with a home game against Seneca Valley. The game will be broadcast live via the internet on the North Allegheny Sports Network.