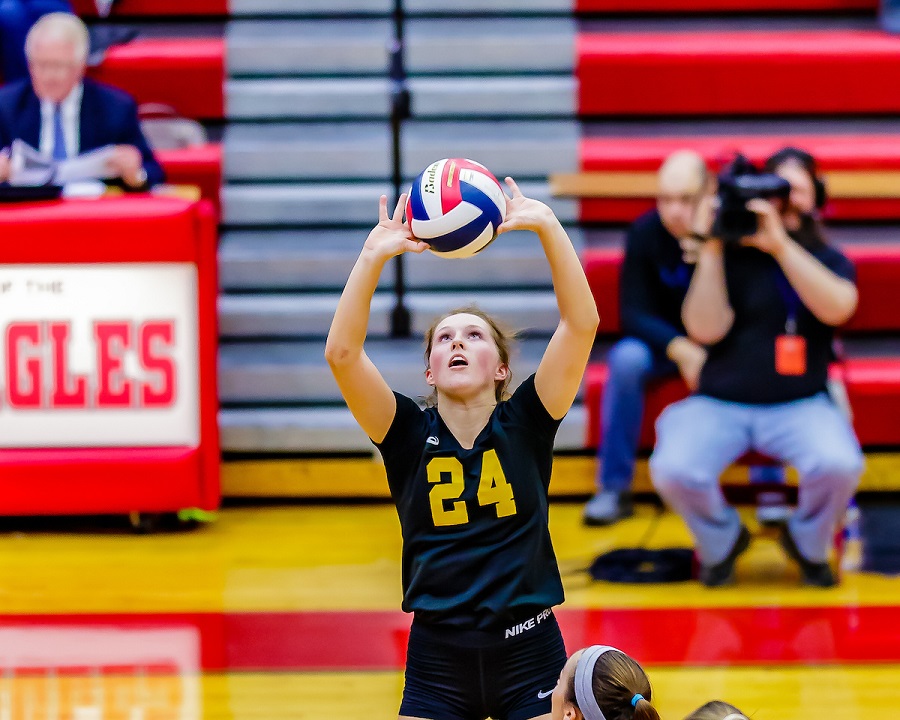 The North Allegheny girls’ volleyball team won a section title for the fifth straight season with a 3-0 sweep of Pine-Richland on Thursday night. Four of the five crowns have come with an undefeated section record. The Tigers capped a perfect 12-0 trip through Section 1-AAAA by set scores of 26-24, 25-20 and 25-20 to earn the win over the visiting Rams.

In a matchup pitting the No. 1 and No. 2 ranked teams in Class AAAA against each other, the second-ranked Rams jumped out to a 17-13 lead behind the powerful swings of freshman Kaili Doctor, who posted five kills in the opening set. The Tigers rallied but still trailed 24-23 in the late stages of the set. The reigning PIAA champions came through in the clutch with a kill from senior Maddi Curran, a dump by junior setter Paige Morningstar and an ace by Curran to prevail, 26-24.

The Tigers stormed out of the gates in set two and grabbed a 17-8 lead. The Rams chipped away and came to within three points of the Tigers, trailing 22-19. North Allegheny scored three of the next four points to pick up the win in set two, 25-20. Senior Abby Miller posted a kill and a block down the stretch and Curran finished off the set with a kill.

Set three was deadlocked 10-10 before NA pulled away with a 6-0 run and nine of the next 10 points. Junior Paige Miller capped the set with a well-placed kill, closing out a 25-20 win and a 3-0 sweep of Pine-Richland. The victory was NA’s 63rd in a row and 15th straight against Pine-Richland.

Senior libero Malia Duffy was fabulous on defense with a team-high 21 digs. Curran paced the offense with 11 kills, followed by Morningstar’s nine kills. Morningstar dished out 15 assists as well.

North Allegheny concludes the regular season with a 16-0 overall record and 12-0 mark in Section 1-AAAA. The Rams finish in second place in the section with a 10-2 record. The Tigers will host the NA Invitational on Saturday for one final test before the playoffs begin next week.