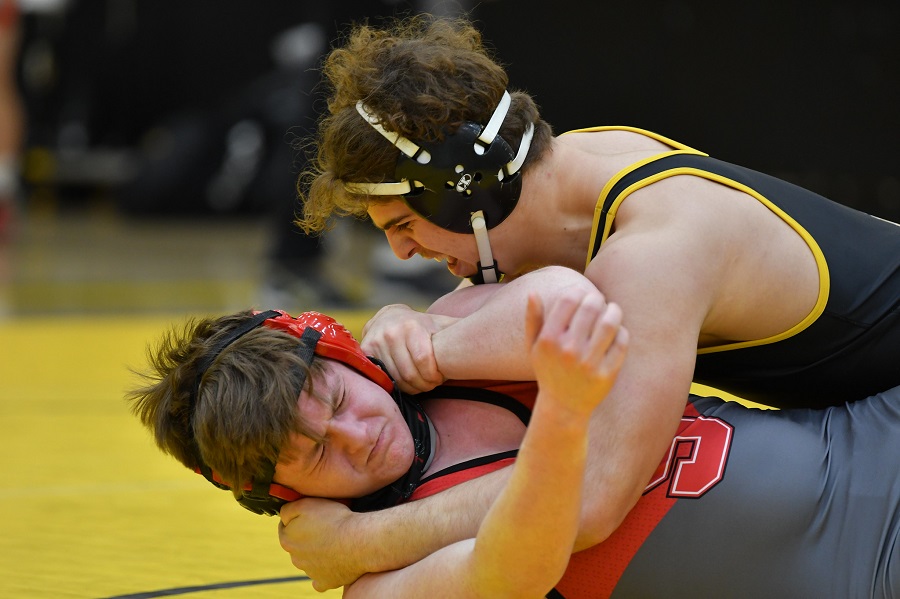 Eight teams traveled to North Allegheny High School for the NA Duals on Saturday morning. The host team, North Allegheny, went 4-1 in its matches, as the Tigers were victorious against Upper St. Clair, Highlands, Penn Trafford and Mars. Unfortunately, North Allegheny took its first loss of the season against the Panthers of Franklin Regional.

The Tigers started the day with one of their two shutouts, defeating Upper Saint Clair 69-0. It took extra time for freshman Aidan Buggey to win a 4-3 thriller against Jaden Keating. Buggey’s efforts earned him the Wright Automotive Wrestler of the Match honors.

The second match of the day did not go in favor of North Allegheny, as the Tigers lost 30-25 to the Panthers of Franklin Regional. After Franklin Regional took a 6-0 lead, the Tigers answered with a fall by junior Dylan Coy (120). The Panthers would win three of the next four bouts, bringing the score to 19-7 going into the 152-pound match. North Allegheny then took the lead when sophomore Adam Rohan picked up a decision and senior Collin McCorkle (160) won by fall.  Franklin Regional won the next two matches, but North Allegheny answered with two wins of its own. Senior Brady Leczo (215) won by major decision, followed by a 12-8 victory from the Wright Automotive Wrestler of the Match award winner, junior Luke Rumpler (285). The Tigers had the lead going into the last match, but Franklin Regional was able to win at the 106-pound class.

North Allegheny avenged its loss against Franklin Regional with a 52-21 win over the Highlands Golden Rams. Earning victories by fall were freshman Casey Walker (106), sophomore Sam Horton (113), and seniors Bradley Stipetich (138), Max Stedeford (145), and Leczo (215). Stedeford was leading 18-5 after the first period before securing a fall early in the second period. His efforts earned him the Wright Automotive Wrestler of the Match. Sophomore Nathan Monteparte (132) also secured a major decision victory.

North Allegheny finished the day with its second shutout of the day, beating Mars 74-0. Winning by fall for the Tigers were Bradley Stipetich (138), McCorkle (160), Rumpler (285), Coy (120) and Gorman (126). Because of his 32 second fall, McCorkle was named the Wright Automotive Wrestler of the Match.

Coy, Monteparte, Rohan, McCorkle and Leczo were 5-0 on the day.

The Tigers, who now sit at 11-1 overall on the season, will return to the mat on Friday, February 5 at the Canon-McMillan Duals.