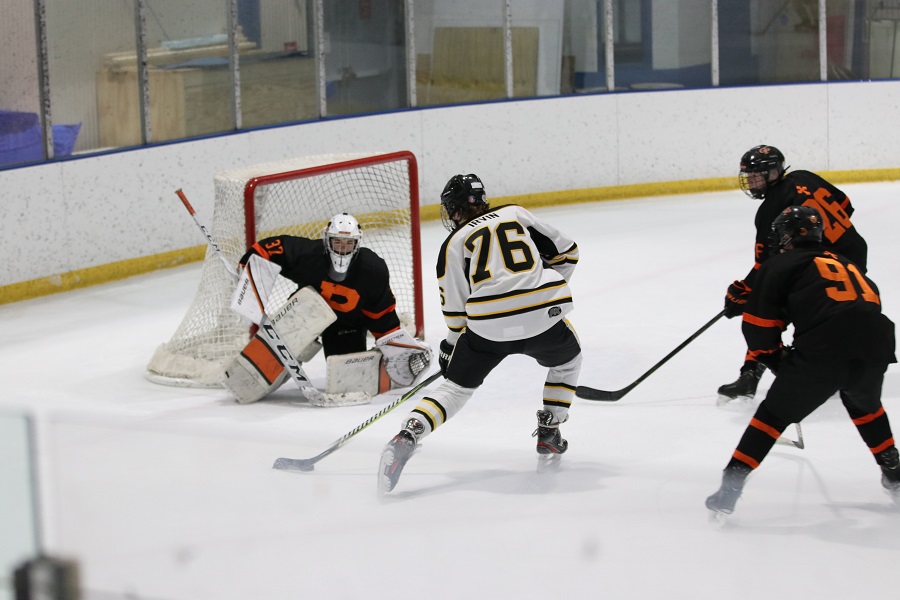 The North Allegheny ice hockey team won its fourth straight game on Thursday night with a 4-3 victory over Cathedral Prep at the Baierl Ice Complex. The Tigers built a 3-0 lead and held off a Ramblers rally to remain in first place in the Class AAA standings.

Sparked by a strong effort on the forecheck, the Tigers forced several turnovers that developed early momentum. One such turnover led to the first goal of the game at the 3:04 mark of the first period. Sophomore Matthew Irvin initiated a steal near the blue line and fed a pass to Connor Chi on the left wing, who then found Luke Washabaugh open on the right side of the crease for a goal and an early 1-0 lead. The goal by Washabaugh was his fourth of the season.

At the 12:19 mark of the first, the NA lead increased to 2-0 on a goal by Chi, assisted by Irvin and senior captain Matt Gentile.  The advantage stretched to 3-0 at the 8:01 mark of the second period when Irvin sniped a shot from a tough angle past Cathedral Prep goalie Devon Dovichnow. With a goal and two assists on the night, Irvin was named the Wright Automotive Player of the Game by the North Allegheny Sports Network.

Up by three goals, the Tigers seemingly were in control. However, the Ramblers rallied back with second period goals from Ryan McKinsey and Avery Ball, trimming the NA lead to 3-2 by intermission.

In the third period, a rush up ice initiated by sophomore Trey Gallo led to a goal by senior Aaron Mark, his third of the season, and North Allegheny held a 4-2 advantage with 13:18 remaining on the contest. The Ramblers eventually cut the score to 4-3 on a marker by Matt Loza with eight seconds left in the game, but the goal was too little, too late as NA held on for the one-goal victory.

Senior goalie Josh Bailey made 16 saves to improve to 4-0 on the season. Dovichnow stopped 26 of 30 shots in a losing effort for Cathedral Prep.

North Allegheny leaps to 5-1 on the season, while Cathedral Prep falls to 1-4 on the campaign.