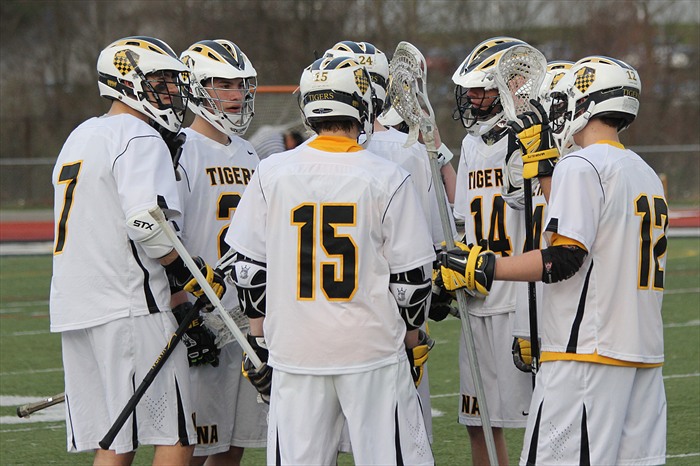 On a brisk night at Franklin Regional High School, the North Allegheny Tigers ran their winning streak to six in a row with a 9-4 victory over the host Panthers on Wednesday night. Senior Kyle Rullan’s four goals, including a natural hat trick in the first half, helped the Tigers to a Division 1, Section 2 triumph.

Franklin Regional held a 2-1 lead over the Tigers in the first quarter before NA exploded with five unanswered goals. Sophomore Gavin Hagen tied the game with a goal with 1:43 to go in the opening stanza, bringing the score to 2-2.

Rullan assisted on North Allegheny’s first two goals, but took it upon himself to score the next three consecutively to give the Tigers a 5-2 lead.  Rullan’s third goal came with 8:40 to play before halftime but it was not the end of NA’s bombardment on the Franklin Regional net.  Hagen followed with his second tally of the evening with 5:20 remaining in the half to make it 6-2, Tigers.

Franklin Regional scored the final goal of the first half and the opening goal of the second half to pull within two goals of the Tigers, but North Allegheny’s defense clamped down on the Panthers and allowed only seven shots in the second half. The defense forced 12 errors with sophomore Greg Ferringer leading the team with eight. Sophomore Jack Kairys added two forced errors.

With the Panthers held in check, North Allegheny’s offense further dashed the Panthers comeback hopes by netting the final three goals of the game for a 9-4 victory. Along with Rullan’s four goals and Hagen’s pair, senior Teddy Ednaczyk, freshman Wes Powell, and senior Zech Nachazel all scored goals for the Tigers. Senior Zach Smith led the team with eight ground balls and dominated the faceoff circle by winning 12 of 16 draws.

The Tigers continue to sit atop Division 1, Section 2 with a 4-0 section mark and 9-1 record overall.  Franklin Regional dips 3-7 overall and 1-3 in section play.  North Allegheny hopes to extend its winning streak with a home contest against Fox Chapel on Friday night. The game will be broadcast live via the internet on the North Allegheny Sports Network.  Start time is scheduled for 7:00 pm.