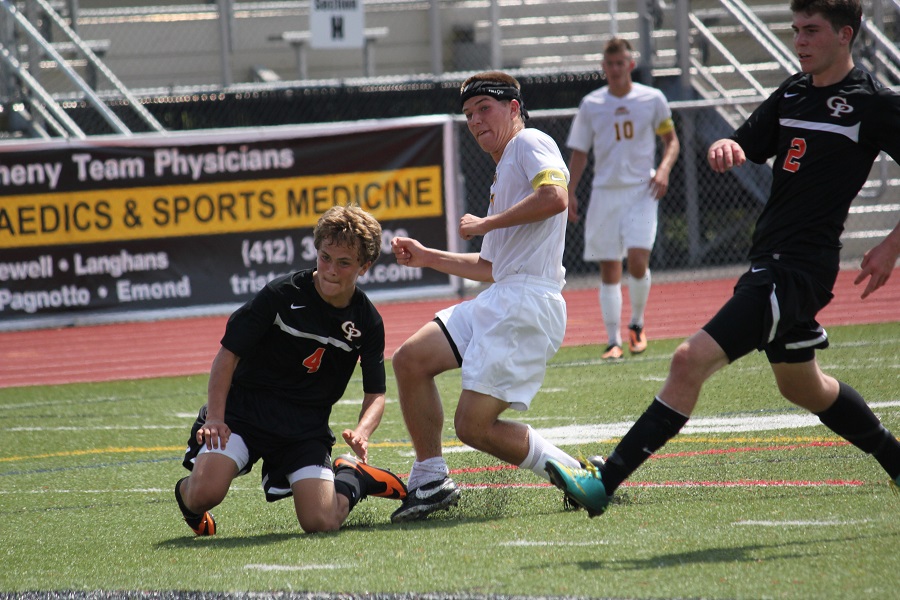 North Allegheny hosted Plum in a non-section game, and Coach Vosmaer had a short bench to work with as there were a number of players not available. However, the depth of the team’s roster came through as NA controlled the entire game and prevailed, 4-2.

During the first 10 minutes, NA quickly set the tone for the game, keeping the ball in the offensive end, and peppering the goal with shots. In the 4th minute, junior Sam Conti set up sophomore Michael Peters on a nice run, with Peters then feeding senior Peter Tobias who missed just wide of the goal. Two minutes later there was a scrum in front of the Plum goal, with NA getting a number of shots which were blocked by Plum. Plum tried to clear, but Tobias gathered the ball at about the 25 and blasted a left footed shot which went just wide left.

Plum was finally able to get the ball into the NA side of the field, but was unable to mount anything. In the 17th minute, junior Kevin Dougherty gained control and sent a long diagonal cross from about midfield towards the goal and Michael Peters headed the ball past the Plum goalie for a 1-0 NA lead.

However, Plum quickly came back and two minutes later as Orazio Barbarino one timed a corner kick in to tie the game at 1-1. Plum continued pressure after the goal with Michael McGuire having a strong shot which NA junior goalkeeper Luke Nolan made a brilliant save on to keep the score tied.

NA regained control of the pace, and after a Plum penalty, senior Andrew Earle took a free kick from the 33 yard line and started the action again. The ball came out to senior Alex Dorazio who made a great run down the right side and sent a beautiful cross which senior Eric Cunningham was able to convert into a goal to make it 2-1, NA. About three minutes later, after another Plum foul, Earle took a free kick from the 19, and curved a shot around the Plum wall and tucked it inside the near post to make it 3-1, North Allegheny.

In the 26th minute, sophomore Alex Gill was set up by Dorazio, but shot just wide of the goal.

There was no scoring for the rest of the half, and the NA defense of senior Andy Mahler, senior Zack Nimmo, sophomore Nick Thornton and Dougherty thwarted any Plum offense.

Plum came out aggressively in the second half, but NA’s defense remained staunch. In particularly seniors Mahler and Tobias were not allowing Plum to get any momentum and both repeatedly made nice plays to clear the ball.

In the 55th minute, Earle played a great through ball to Conti , but the Plum goalie made a great save. A minute later, Earle made a strong defensive play with a slide tackle to force a turnover. Peters picked up the ball on the outside and made a run finishing with a crisp pass to Mahler, who played a through ball to Gill, who chipped it back to Peters for a goal and 4-1 Tigers advantage.

Action continued through the half, with NA’s depth showing, and junior Rafael Bergerman giving quality minutes in the midfield. Additionally, senior Derek Schwartz and junior Adam Maloney filled in on defense and continued the pressure on Plum. In the 76th minute, Dorazio broke on another run, and crossed it to sophomore Evan Gick, who in turn fed junior Jason Lin, who missed just wide right of the goal.

In the last two minutes of the contest, Plum was able to break through with Corey Williams making a nice run and scoring from about 11 yards out to make the final score 4-2, NA.

With the win, North Allegheny remains undefeated and returns to section play this week with games on Tuesday at Hampton, at home on Thursday with Seneca Valley, and at North Hills on Saturday afternoon.