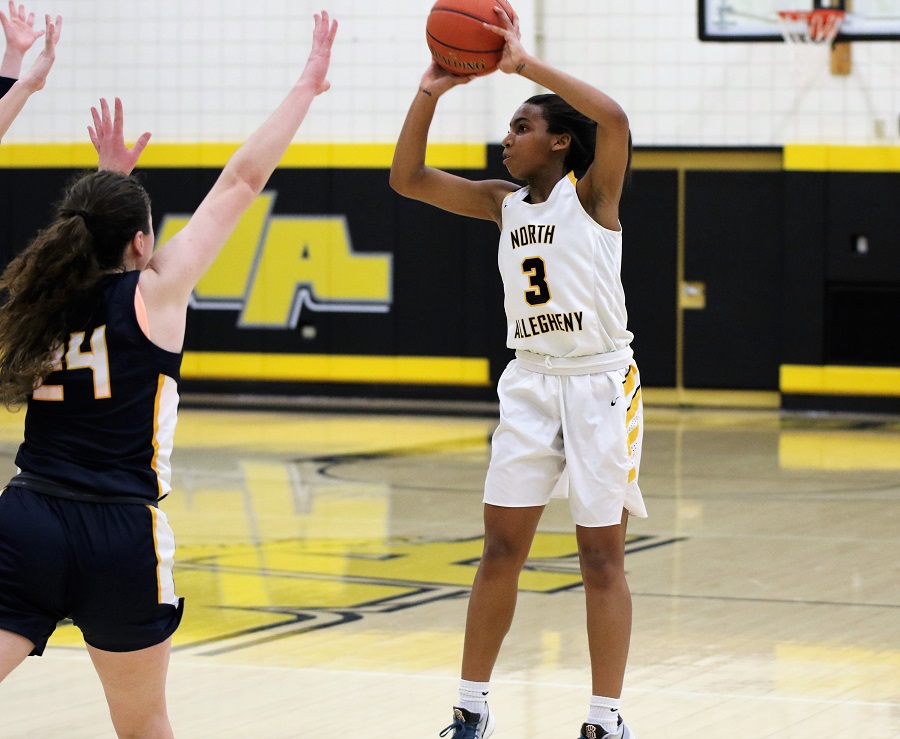 North Allegheny rallied from a 10-point fourth quarter deficit for a thrilling 46-43 win over the Norwin Knights on Monday night in Section 1-6A action. Junior Jasmine Timmerson buried a 3-pointer at the buzzer to cap a 13-0 run and lift the Tigers to the victory. The outcome also marked the 350th career coaching win for North Allegheny head coach Spencer Stefko. 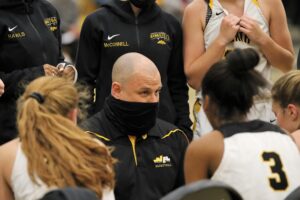 In what has typically been a low-scoring rivalry between NA and Norwin, the two teams combined for 33 points in the opening stanza. Playing at NA’s preferred up-tempo pace, the Tigers held an 18-15 lead after one quarter of play. First half 3-pointers were provided by Timmerson, Seton Hill commit Emma Fischer and sophomore Caroline Henderson.

Norwin was able to weather the early storm thanks to the all-around play of Alderson Broaddus commit, Brianna Zajicek, who scored 11 of her team-high 15 points in the first quarter. Zajicek poured in a pair of 3-pointers, including a trey at the buzzer to end the first period.

In the second and third periods, the Knights slowed down the Tigers with the inside play of senior forward Alyssa Laukus and 6-1 sophomore forward Lauren Polangio, and built a 35-31 advantage after three quarters. Laukus, a Chatham University commit, touched double figures with 11 points on the night and Polangio added another six points in the paint.

Following a 3-pointer by senior Chloe Lukondi, Norwin increased its lead to 43-33 midway through fourth quarter. That’s when North Allegheny staged a dramatic comeback, spearheaded by the defensive prowess of Timmerson.

A day after announcing her verbal commitment to the University of Pittsburgh, Timmerson initiated the rally with back-to-back steals and layups to trim the deficit to 43-37 in a matter of 30 seconds. The Timmerson thefts sparked the tide-turning run that eventually tied the game in the final minute.

A Timmerson pass in the paint set up junior Mia Tuman for a layup that cut the deficit to 43-41 with 54 seconds left. Tuman, who finished with 10 points on the night, created a steal and cruised to basket for a game-tying layup with 21 seconds remaining. 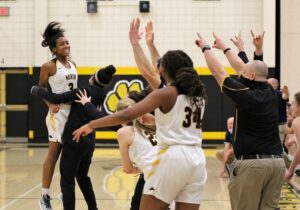 Jasmines Timmerson celebrates with her teammates following the game-winning basket.

With the game-deadlocked at 43-43, the North Allegheny defense fittingly made one final stop of the Knights in the waning seconds. With 6.7 seconds remaining, Norwin’s final offensive set was preempted on another pickpocket by Timmerson, who was fouled on the floor by the Knights with 2.6 seconds to go. On their final shot attempt of night, Timmerson beat the buzzer with a game-winning 3-pointer to lift North Allegheny to a 46-43 victory.

The win is North Allegheny’s 17th in a row and increased the Tigers’ record to 7-0 overall and 3-0 in Section 1-6A. Norwin falls to 5-2 overall and 2-1 in section play. The Tigers will return to action on Thursday night for another section game at Butler at 7:30 p.m.