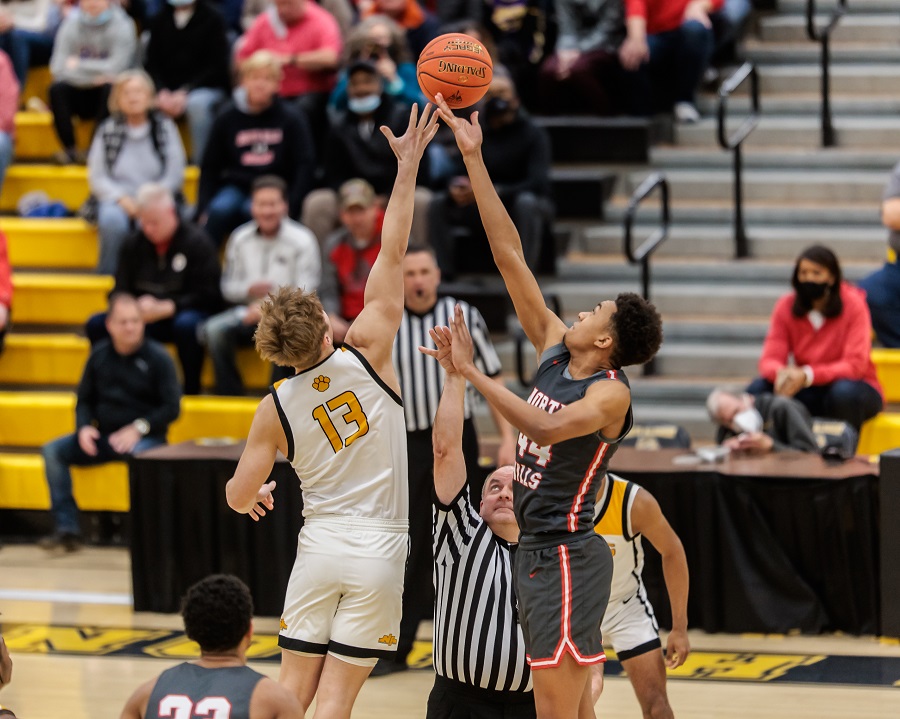 The North Allegheny boys’ basketball team took the top-ranked North Hills Indians to the limit on Friday night at UPMC Court, dropping a narrow 60-59 decision in the section finale. The contest came down to the final possession but North Allegheny’s final shot at the end of regulation missed its mark and the Tigers upset bid fell just short.

North Allegheny was revved up from the very start and opened the game with a 3-pointer by senior Robby Jones for an early 3-0 lead. The Tigers led by as much as seven points in the first period and held an 18-17 lead after one quarter of play.

North Hills weathered the early storm and outscored the Tigers, 17-8, in the second period to grab a 34-26 lead by intermission. In the third quarter, the Indians’ lead swelled to 42-31 at its largest point. Sophomore forward Royce Parham paced the Indians with a 20-point effort and senior guard Alex Smith added 17 points.

Undaunted, North Allegheny rallied from the 11-point deficit and used a 14-3 run to end the third quarter to take a 54-52 lead heading into the final stanza. The Tigers comeback bid was backed by senior Matt McDonough who posted a game-high 27 points and six 3-pointers. Jones also touched double figures for the Tigers with a 13-point effort.

In the fourth quarter, North Hills slowed the pace and grinded out a critical 8-0 run for a 60-54 lead with a little over 2:00 remaining in the game. Just as it seemed the No. 1-ranked team in Class 6A might pull away, the Tigers displayed their mettle and fought back.

McDonough answered with a layup to cut the score to 60-56 with just under two minutes remaining. After a couple of empty possessions for each team, a clutch steal by Erik Sundgren with one minute left gave the Tigers a huge lift. The theft by Sundgren was followed by a deep 3-pointer by McDonough with 48 seconds remaining, cutting the North Hills lead to 60-59. McDonough earned Wright Automotive Player of the Game honors.

With 22 seconds remaining, a foul sent North Hills’ senior William Blass to the free-throw line for a one-and-one opportunity. However, Blass missed the free throw and the Tigers hauled in the rebound for one last possession and chance to win the ballgame. With time ticking down, North Allegheny couldn’t find an open shot and called a timeout with 2.5 seconds remaining. On the final and decisive play, the Tigers struggled to find an open player on the inbound pass from the baseline. Before a five second violation could occur, the inbound pass found its way to Jones in a tough position under the basket. Jones’ last-ditch shot from close-range hit the rim but was just short as North Hills hung on for a 60-59 win.

Following Friday night’s result, North Allegheny falls to 13-8 overall and 4-8 in Section 1-6A. North Hills improves to 20-0 overall and finishes off a perfect trip through the section with a 12-0 mark. The Tigers will visit Cathedral Prep on Saturday at 1:15 p.m. in their regular season finale.