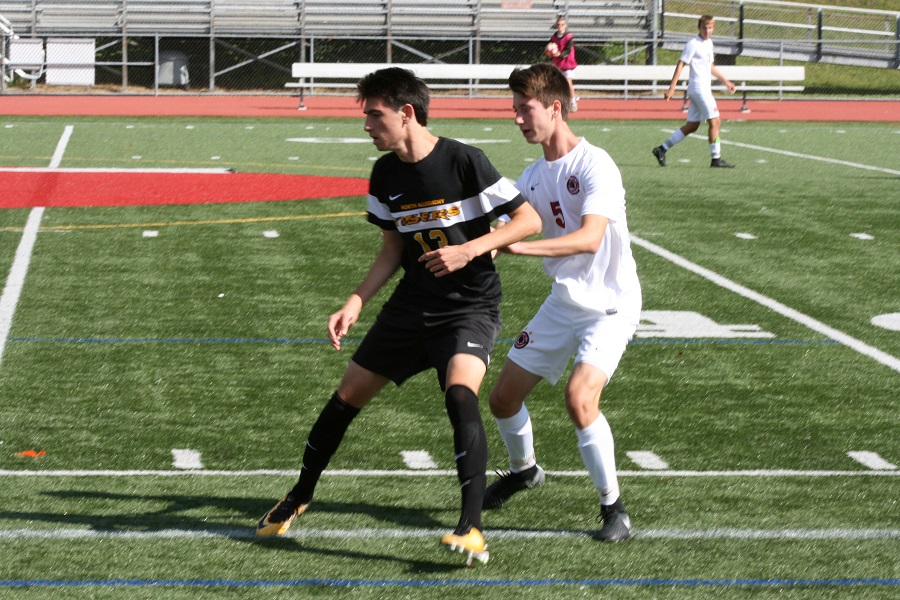 Saturday’s matchup between North Allegheny and Peters Township pitted the No. 1 and No. 2-ranked teams in the Pittsburgh Post-Gazette boys’ soccer poll. In a tightly played non-section contest, the host Indians defeated the Tigers, 2-1.

In a close contest, the Tigers and Indians felt each other out in the first half with the Indians hitting two posts on breakaways and the NA squad getting shots on goal, but nothing dangerously close to the Peters goal. The statistics showed the Tigers with a 4-0 shot advantage and corners even at 2-2.

North Allegheny came out strong in the second half with a free kick at 32:58 by Sean Atwater hitting the cross bar, but staying out of the goal.  Goalie Grant Glorioso, who has seen his fair share of breakaways coming at him, saved two before Atwater scored from 35 yards out on a free kick at 28:33 to give the Tigers a 1-0 lead.  At 26:28, Cam Yurick put one off the post, then at 22:50 Josh Luchini fed a pass to Yurick who was alone with the Peters goalie who made a point blank save to keep the score at 1-0, Tigers.

Just when it seemed the Tigers had the momentum, a turnover at midfield led to an Indians goal at 16:11 by Luke Kelly on a well-placed shot from 30 yards out. Peters continued to pepper the Tiger net as Glorioso made saves at 14:27, 13:27 and a big save at 9:40 on another breakaway keeping the game tied. However, at 8:10 a questionable penalty was called against a Tigers defender and Kelly converted the penalty kick for a 2-1 Peters Township lead.  Over the remaining minutes the Tigers could only muster a free kick shot on goal by Atwater and a last second shot on goal by Glorioso who was pulled from his net.

The Tigers fall to 3-2 on the season and start section play this Tuesday at home vs. Seneca Valley in what proves to be a very important early section contest.  The game will be broadcast live by the North Allegheny Sports Network.