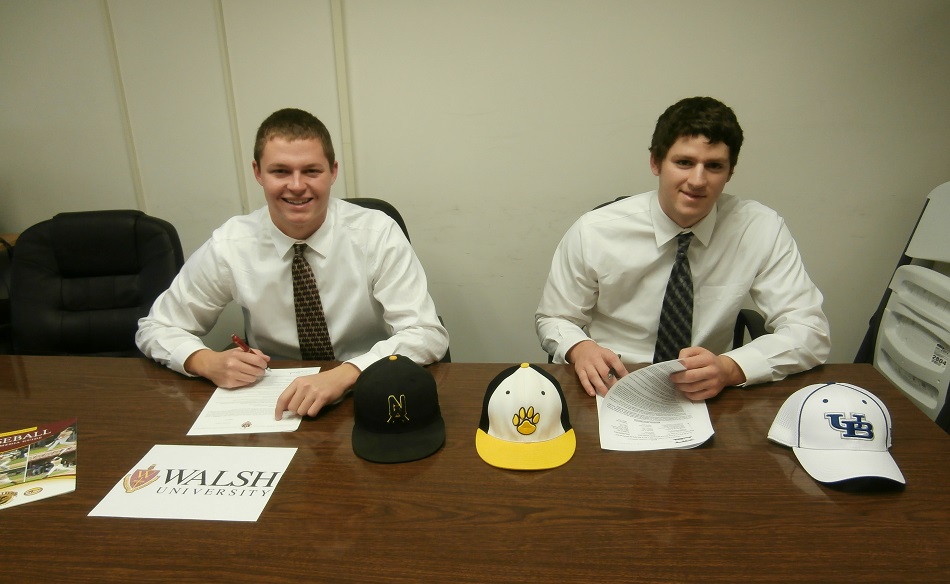 North Allegheny baseball players Brandon Rossier and Mitch Machi have signed letters of intent to continue their academic and playing careers.  Rossier, who is also a kicker on the NA football team, has signed on to play at Walsh University, a Division II school in North Canton, Ohio. In the fall, Rossier averaged 33.2 yards per punt on the gridiron.  At Walsh, Rossier plans on majoring in Secondary Education with a teaching certificate in mathematics.  Brandon is the son of Carol and Charles Rossier.

Machi, who has been a key contributor in the outfield and on the mound since his sophomore year for the NA baseball team, has inked a letter of intent to play at the University of Buffalo. At the plate, Machi has a career batting average of .268 with two home runs, 14 RBI’s and 12 runs scored. As a pitcher, the right-hander has been extremely valuable for the Tigers, turning in a record of 11-2 in 17 appearances and owning a 2.04 ERA.  In 88.1 innings of work, Machi has punched out 65 batters while walking 38. On April 6, 2012, the NA hurler tossed a no-hitter against the Fox Chapel Foxes.  Machi plans on majoring in International Business at the University of Buffalo. Mitch is the son of Cathy and Peter Machi.