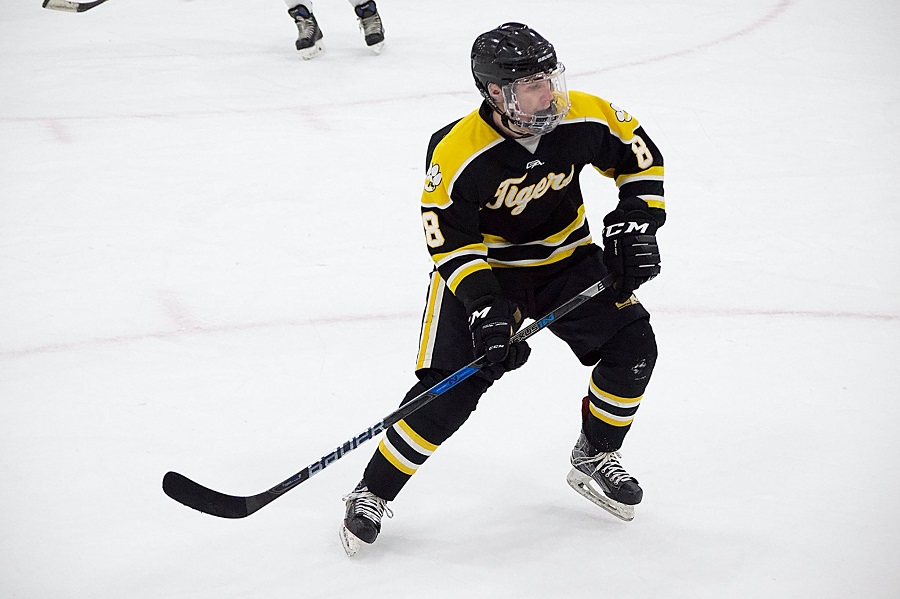 Junior Tyler Lamark scored both of North Allegheny’s goals, including the game-winner with 17 seconds remaining, to propel the Tigers to a 2-1 victory over the Seneca Valley Raiders on Monday night at the Baierl Ice Complex. The win secured a season sweep over the rival Raiders and keeps NA’s hope for the No. 1 seed in the upcoming PIHL playoffs alive.

With two of the top goaltenders in Class AAA going head-to-head, the game lived up to its billing with a scoreless first period. North Allegheny goalie Richard Karapandi stopped 19 shots and lowered his Class AAA best goals against average to 1.65 on the season. Seneca Valley netminder Aiden Campbell made 20 saves in his return to the Raiders. Campbell was appearing in his first game since missing the past few weeks of action while participating in the USHL, the top junior hockey league sanctioned by USA Hockey.

Despite Campbell’s impressive credentials, the Tigers were able to push a puck past him in the opening minute of the second period. Senior Aaron Miller weaved through the SV defense and passed to his left where he found Lamark. From a sharp angle, near the goal-line extended, Lamark’s backhand attempt trickled through Campbell and into the net for a 1-0 North Allegheny lead just 31 seconds into the second period.

Seneca Valley answered back when Austin Albert scored on a 5-on-3 power play to even the score at 1-1 at the 4:09 mark of the second.

Thanks to the stellar play of both team’s goaltenders and defenses, the game remained tied until the final minute of the final period. With the game appearing destined for overtime, North Allegheny took advantage of a slashing penalty on SV’s Tyler Draper with just 1:04 remaining in regulation. The Tigers turned Draper’s miscue into the game-winning goal when Lamark tickled the back of the net with just 17 seconds to play to lift NA to a 2-1 victory. Lamark’s goal was assisted by Miller and Tyler Duderstadt. For his heroics, Lamark was named the Wright Automotive Player of the Game by the North Allegheny Sports Network.

Click here to listen to an audio highlight of Lamark’s game-winning goal from Monday night’s broadcast.

With the win, North Allegheny improves to 13-4 on the season, while Seneca Valley slips to 6-10 on the year. The Tigers will visit Butler on Monday, February 18 at 9:10 p.m. in the regular season finale.