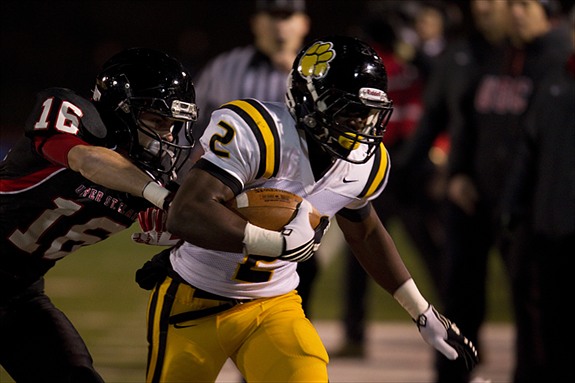 In a see-saw affair that had six lead changes, the Upper St. Clair Panthers upended the North Allegheny Tigers for a 41-23 win in the WPIAL Quarterfinals on Friday night from Baldwin High School. The ninth-seeded Tigers went toe-to-toe with the top-seeded Panthers, but three unanswered scores in the game’s late stages vaulted USC to a date with the Woodland Hills Wolverines next week in the semifinals. An injury to starting tailback Trevor Morrow thrust Upper St. Clair’s unheralded quarterback Joe Repischak into the limelight as the senior completed 11 of 14 passes for 257 yards and two touchdowns through the air, and added another 43 rushing yards and two touchdowns on the ground.  North Allegheny quarterback Cage Galupi also had a big night, completing 18 of 39 for 288 yards and three scores.  Galupi was named the Wright Automotive Player of the Game by the North Allegheny Sports Network.

On the game’s first possession, Galupi led the Tigers on a 70-yard march in six plays, accounting for 69 of those yards with his passing arm. The drive was capped on a 6-yard touchdown pass to Elijah Zeise as North Allegheny jumped in front, 7-0.  The Panthers wasted little time in responding to the Tigers score, swiftly moving down the field on a 71-yard drive in five plays. Morrow toted the ball two times on the drive for 27 yards, but it was Repischak who ran into the end zone on a 1st and goal for a 3-yard touchdown and a tie score, 7-7, with 7:13 to go in first quarter.

After a punt by the Tigers, the Panthers used just four plays to travel 69-yards on their next possession and grabbed the lead on a 14-yard touchdown run by Morrow to put USC ahead, 13-7.  The extra point by Max Herold was no good.

The North Allegheny defense forced the first turnover of the game late in the first quarter when USC tight-end Dustin Hess hauled in 5-yard pass but was stripped by NA’s Nick Woytowitz and linebacker Reilly Sullivan recovered to give the Tigers the ball at the Panthers 35-yard line.  The Tigers converted the turnover into a 32-yard field by Seth Mancuso and NA had trimmed the deficit to 13-10.

Late in the second quarter, the Panthers were knocking on the door with a 1st and goal at the NA 3-yard line. In similar fashion to their goal-line stand from their opening round win against Bethel Park, the Tigers turned away Upper St. Clair with a 3rd down interception by Zeise as he fell forward to the NA 7-yard line.  With a tremendous play, Zeise was just a few off balanced steps away from a pick-six.

Faced with a long field, the Tigers offense drove 93 yards in 11 plays after the Zeise interception to take a 16-13 lead when Galupi found tight-end Paul Blendinger for a 9-yard touchdown pass with 0:36 to go before halftime. Mancuso’s extra point attempt was blocked. On the scoring drive, Zeise was injured while making a terrific leaping catch at the USC 21-yard line and was unable to return to the game. Zeise finished with seven catches for 121 yards and one touchdown.

The Panthers lost the services of 1,000 yard rusher Morrow in second quarter as well and turned to Stephen Mackowick at tailback in the second half.  While the Tigers held Mackowick to only 24 yards on 11 carries, the Panthers needed Repischak to step up and he did, delivering a 76-yard touchdown strike to Ben Southorn on the second-play of the third quarter to lift USC to a 20-16 advantage.  Undaunted, the Tigers answered midway through the third quarter with a 48-yard touchdown pass from Galupi to Isaac Weaver to vault NA ahead, 23-20.

On the ensuing drive, USC faced a 3rd and 10 at the NA 31-yard line when Repischak lofted a pass to Hess for a touchdown to give the Panthers a 27-23 lead with 2:57 to go in the third quarter. Early in the fourth period, Upper St. Clair put the game away with a 2-yard touchdown run by Repischak and a blocked punt by Jesse Springer and recovery by Andrew Bartusiak in the end zone to bring the final score to 41-23.

The loss did not spoil a valiant effort by the Tigers and another outstanding season for North Allegheny, Coach Art Walker, and his staff. North Allegheny ends the 2013 campaign with a 7-4 record.  Upper St. Clair remains undefeated at 11-0 and will face the Woodland Hills Wolverines in the semifinals next week. For complete team and individual stats, click here.