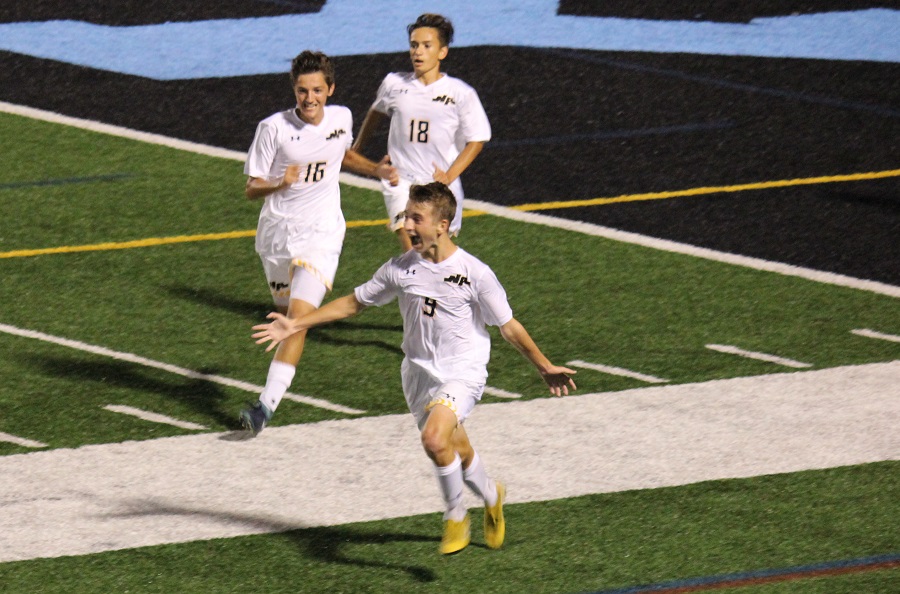 Drama is never in short supply when the North Allegheny boys’ soccer team takes to the pitch against its friendly foes from the north, the Seneca Valley Raiders.  The Tigers took their four-game unbeaten streak against the Raiders to NextTier Stadium and extended it to five in a row with a 2-1 victory in double overtime. Junior Will Cinker scored the game-winning goal to propel the Tigers to the section win.

NA had a decisive edge in possession time through most of the entire first half and the first shot on goal was registered by junior defender Samuel Giannetti at 32:03.  The Tigers moved the ball with precision with junior Luke Anderson and senior Kyle Kaczmarek patrolling the midfield, while the Raiders style of play appeared to be to fall back and wait for a mistake to be made.  The Tigers did not comply.

With a little room to maneuver, Cinker launched a laser from the left corner into the box that was a bit too hot for the goalie to handle, deflecting through his extended hands.  Anderson was well positioned for the rebound lifting his leg high for a strongly struck volley that flew past the Seneca keeper into the top left corner of the net at 25:21 for the 1st goal of the game.

Strong team defense is becoming a staple in this young season for this 2018 team.  Several Seneca Valley offensive threats were quickly dispersed by the Tigers starting back line of seniors Brennan Donovan, Austin Smith, Niko Hindsbo and Giannetti.  Senior goalie Devon Angermeier made three tremendous saves in the later part of the half and senior defender Drew Hunker replaced Giannetti and delivered the same level of stout defense to protect the lead.

Upon the start of the second half, it was clear that Seneca Valley stepped up its game to aggressively seek the game tying goal.  Seneca had a decisive advantage in possession time and set pieces in the half, but the Tigers were able to prevent them from scoring, almost all the way through.  With 5:02 remaining, SV junior Ben Francis took a direct free kick from just outside the 18’ on the right.  A sinking arc was so well placed it evaded Angermeier’s reach, hit squarely on the inside of the top right corner of the net and fell back into the goal, tying the game at 1-1.  After some scrambling both ways through the final five minutes of regulation, the Tigers and Raider headed, once again, to overtime.

In the first 10-minute overtime, it appeared a goal had been scored early.  Junior forward JD Runatz swung a perfectly placed corner kick towards the back post where Cinker awaited and headed the ball toward the net.  The goalie appeared to have made a save and carried the ball beyond the goal line.  As the Tigers began to celebrate, the referee ruled that the goalie had been interfered with and no goal was awarded.

In the second 10-minute overtime, it was clear both teams were running on fumes.  Fierce battles ensued for every single possession.  As the clock ran to under two minutes remaining, the Tigers found themselves with the ball in close.  Junior forward John Ross, who had battled valiantly all evening against a strong pair of Seneca Valley centerbacks, found junior Sam Maldia open free for a brief moment from 15’ out from the goal, but the defense quickly closed.  Maldia’s keen awareness saw a clean path to drop the ball to a charging Cinker in from the left.  Cinker struck the bouncing ball cleanly with his right foot and SV goalie Will Gallager appeared to make the save with a single hand pushing the ball north.  However, the momentum of the downward arc carried the ball all the way to the back of the net for a 2-1 victory for the Tigers.

The Tiger victory improved their record to 3-0 overall, 2-0 in the section. The next match is set for Tuesday against Central Catholic at Newman Stadium. The game will be broadcast live via the internet on the North Allegheny Sports Network.