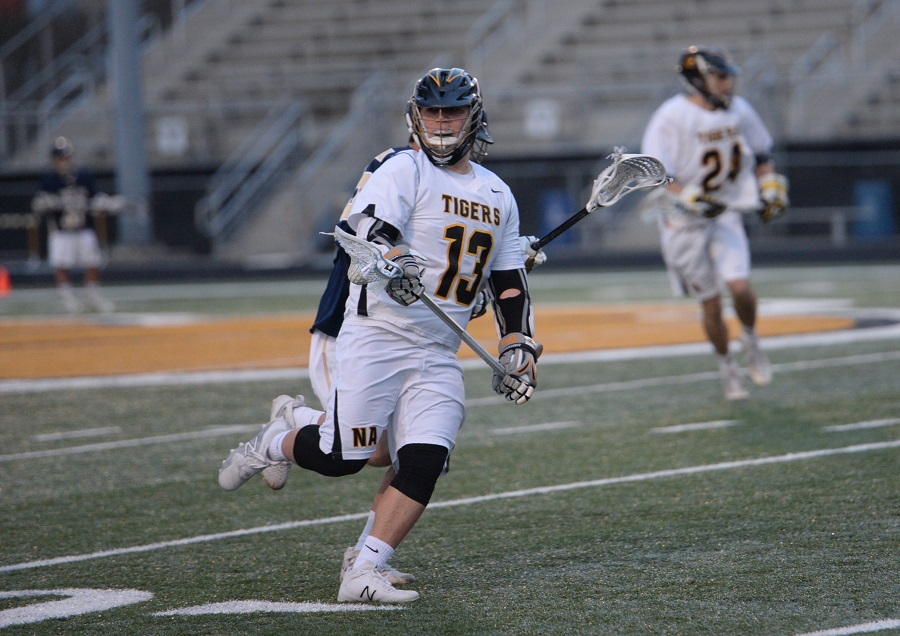 Determined to avenge last year’s playoff loss to the Tigers, Shady Side Academy jumped out to an immediate 2-0 lead in the first period. Sophomore Colm O’Connor and High Point University recruit Clayton Krol gave the Indians a two-goal advantage less than four minutes into the game. Later in the opening stanza, North Allegheny was charged with an unreleasable three-minute penalty but SSA failed to capitalize on this golden opportunity and the score remained 2-0 heading into the second quarter.

Shady Side dictated the pace of play for the vast majority of the first half but North Allegheny inched back into the game on a goal by junior Wes Powell, assisted by freshman Isaiah Davis, with 2:20 left before halftime to cut the score to 2-1, Indians. In the third quarter, North Allegheny turned the tables on Shady Side and eventually tied the game with 1:04 left in the period on another goal by Powell.

The Tigers continued their second-half surge and grabbed the lead when Dillon Dugan unleashed a terrific 40-yard pass to Powell near the crease who buried a shot past SSA goalie Adam Williams for a 3-2 lead with 9:11 to go in regulation. Powell added an important insurance goal with 5:53 on the clock to increase the NA lead to 4-2. For his four-goal performance, Powell was named the Wright Automotive Player of the Game.

The fourth Powell goal proved pivotal as Shady Side was granted another lengthy unreleasable man-up situation and trimmed the NA lead to 4-3 with 4:44 left when Kroll scored his second goal of the night. Despite the unreleasable man-up, the Indians would come no closer thanks to the Tigers defense and goalie Ean Kuska. The senior net minder made six saves for the Tigers, while Williams made nine saves in a losing effort for SSA.  Also contributing to the NA defensive effort was senior Greg Ferringer with a team-best seven ground balls and six forced errors. Face off man Alec Vissotski helped NA control possession by winning 6 of 7 draws in the second half.

With the win, North Allegheny improves to 4-1 overall and Shady Side Academy slips to 4-3 overall. The Tigers will have another non-section home contest on Saturday when the State College Little Lions come to Newman Stadium.