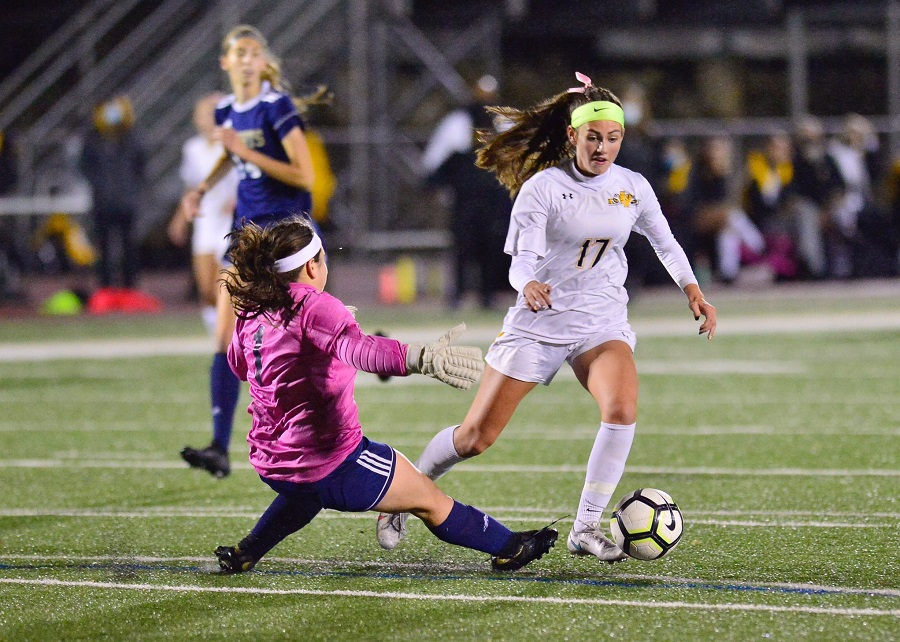 Big First Half Pushes NA through to WPIAL Semifinals

After defeating Norwin 2-1 in overtime in the regular season, the Lady Tigers made sure it only took 80 minutes this time scoring all three goals in the first half and beat the Knights 3-0 on a rainy Thursday night at Norwin High School in the WPIAL Quarterfinals.

Six minutes later, it was Halle Marsalis who found space and put on a good shot. The shot deflected off Waszkiewicz and off the right post and over the back line for another corner. The corner hit off of a defender and went in to give North Allegheny a 2-0 lead. Sarah Schupansky was the last to touch the ball and was credited with the goal. Midway through the first half, Schupansky scored once again when she raced past two defenders and stepped around the keeper and drove a shot into the open net to give the Lady Tigers a 3-0 lead with 19:52. For scoring two goals and assisting on another, Schupansky was named the Wright Automotive Player of the Game.

The defense of Tulasi Syamala, Olivia Mark, Alexa Spano and Kena Shannon frustrated the Norwin offense all half, not allowing a single shot on goal.

In the second half Norwin had a lot of the possession and had two great chances to score with 24:23 left. First, a North Allegheny hand ball in the box gave Norwin a penalty kick. Pitt-recruit Katelyn Kauffman put the ball in the back of the net but a Norwin forward entered the box before the penalty was kicked and the goal was waved off. Norwin then got their first shot on goal of the game shortly after and Julianna Werner was there with a diving save. North Allegheny was able to control the time of possession for the rest of the game and advanced to the WPIAL semifinals with a 3-0 win.

North Allegheny improves to 9-2 on the season. Norwin’s season ends at 9-3-1. Up next for the Lady Tigers will be top-seeded Peters Township on the road on Monday at 6:30 p.m. in the WPIAL semifinals. This game will be broadcast live on the North Allegheny Sports Network.