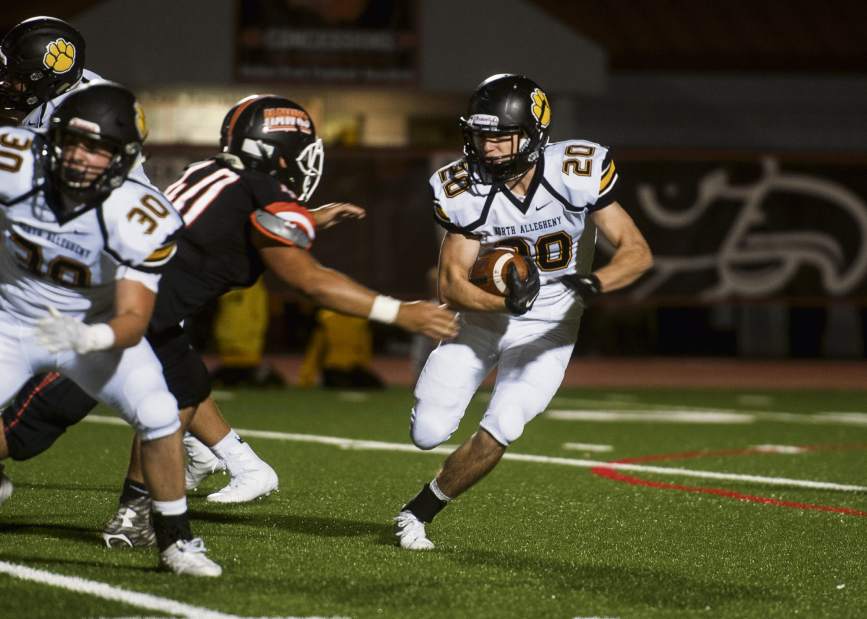 The Bethel Park Black Hawks built a 28-0 lead on four touchdowns by Tanner Volpatti en route to a 35-15 win over the North Allegheny Tigers on Friday night. Volpatti rushed for 145 yards and did most of his damage in the first half. The senior tailback opened the scoring on a 43-yard screen pass from quarterback Luke Surunis for a 7-0 lead with 4:11 remaining in the first quarter. Volpatti scored the next three touchdowns of the game on runs of 7, 1 and 4 yards for a 28-0 advantage. Volpatti’s fourth score came with 8:55 remaining in the third quarter.

North Allegheny got on scoreboard on the ensuing possession and marched 66 yards on eight plays, capping the drive on a 6-yard touchdown run by Ben Maenza to cut the deficit to 28-7. The Tigers defense forced a prompt three-and-out when Bethel Park touched the football again. On fourth down, a high snap sailed over the head of punter Jared Yantek and through the back of the end zone for a safety and a 28-9 score with 4:58 left in the quarter.

It appeared the Tigers had clawed even closer when Luke Trueman tossed a would-be 50-yard touchdown pass to Turner White with 4:44 on the third quarter clock. However, the touchdown was negated by an untimely personal foul penalty on a downfield block. While the Tigers were still deep in Bethel Park territory, the drive stalled and NA turned the ball over on downs.

The Black Hawks turned to multi-purpose back John Doleno in the second half and the senior came through with a 25-yard touchdown run with 9:51 to go in the fourth quarter to put the game out of reach, 35-9. Doleno rushed for 135 yards on seven carries, all in the second half. North Allegheny capped the scoring on a 2-yard touchdown run by Maenza with just over two minutes left in the game to bring the score to its eventual final, 35-15, Bethe Park.

Statistically for North Allegheny, Trueman completed 14 of 28 attempts for 163 yards and one interception. Trueman also led the Tigers in rushing with 87 yards on 11 carries. NA’s leader in receiving was junior Joey Porter Jr. who hauled in six passes for 83 yards. Adding 5.5 tackles on defense, Porter was selected as the Wright Automotive Player of the Game by the North Allegheny Sports Network. To watch an archived video stream of Friday’s game, click here.

North Allegheny slips to 1-1 on the season, while Bethel Park improves to 1-0. The Tigers hope to rebound on Friday, September 8 with a home contests against the Central Catholic Vikings.

(Photo of Ben Maenza courtesy of the Tribune Review.)