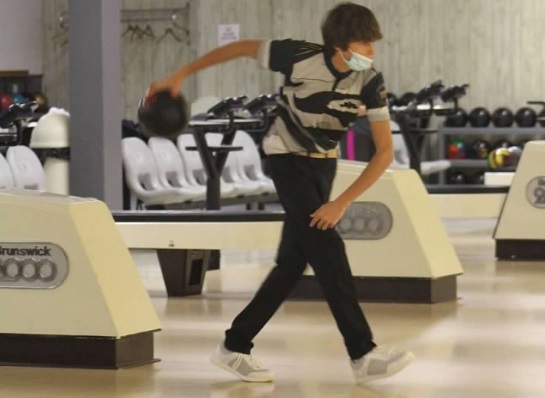 On Friday, the Butler Golden Tornado blew into Perry Park Lanes for the first showdown between WPIBL North Section foes.  The last time these worthy adversaries went head-to-head was in the WPIBL Team Championships last February.  The Tigers won the best of three baker series and were crowned the 2021 WPIBL Team Champions.  The match was sure to be a hard-fought battle with both teams eager to remain undefeated and take early control over the section leadership.

The Tornado amassed a full-frontal assault from the get-go trying to avenge their three losses to the Tigers last season.  Butler’s early lead was spear-headed by junior Alex Ekas.  This strong start resulted in a valiant effort to thwart the Tigers, but fresh out of the gates for NA was sophomore Cole Scott throwing three strikes within the first three frames and the first turkey of the match.  Joining in the battle was senior Jeb Jorden who threw a turkey in frames 4-6.  Senior Marc Sostmann added to the hunt with a Yahtzee of strikes (5 in a row).  Midway through the opening game, the Tigers banded together and outmaneuvered the Golden Tornado.  Scott’s foray of strikes in the last four frames of the game netted six in a row, a wild turkey, and the highest game 1 score between both teams, and the win to North Allegheny, 1011-981.   Atop the leaderboard for the Tigers was Scott-245, Sostmann-234, and Jorden-204.

But the winds of chance seemed to favor the Tornado as they were able to have more pins topple over in Game 2.  Ekas again led the Golden Tornado with a 265; at many points during the game Ekas was unstoppable.  The Tigers were in hot pursuit but unable to string together a large number of strikes to battle back.  To further delay any pursuit, the Tigers threw 5 splits, but were able to convert two of them.  More notably the Tigers missed only one conventional spare out of 40 frames of bowling, a master class in spare shooting.  NA suffered the loss, 966-988.

For the second time this season, the Tigers were on the verge of defeat.  Whoever would win Game 3, would win the match.  Unlike the first two games, the Tigers came out strong and took an early lead.  As all good weather aficionados know, tornadoes are unpredictable and can form very quickly.  Butler quicky regained their composure but were unable to cut into the Tigers’ lead.

Again, all five varsity bowlers banded together to fend off any last gust of wind as the Tornadoes dissipated.  Senior Gavin Rush started Game 3 with a turkey.  Scott and Marc Sostmann quickly add double strikes.  The Tigers went on the final offensive with Jorden’s hambone in frames 5, 6, 7, and 8.  It was in the 7th and 8th frames that the streak of Tigers effectively took control and outran the Tornadoes.  Senior Noah Sostmann threw a turkey. Scott added another.  It was Jorden’s turkey in the 10th frame that sealed the fate of the visiting team from Butler.  NA outscored Butler, 1016-962.  North Allegheny earned 5 of the 7 match points by also winning the number of total pins knocked down, 2993-2931.

Scott finished with the highest three game series of the day with a 665. Close on his heels was Jorden with a 635.  Marc Sostmann’s 600 closed out the top three scores from North Allegheny.  With this win, the NA Boys continued their regular season win streak to 15 matches stemming back to last year’s State Playoff Championship. The Tigers currently sit atop the WPIBL North in sole possession of first place.

On the girl’s side of the action. North Allegheny had an abbreviated two-member team comprised of senior Morgan Maughan and junior Jenny Li.  Butler outscored the Tigers 642-209, 670-160, 674-183.  In the end the Lady Tornado swept and took all seven match points.

These two perennial foes meet up again this Wednesday for back-to-back matches as NA travels to Butler for what is to be shootout for the ages.