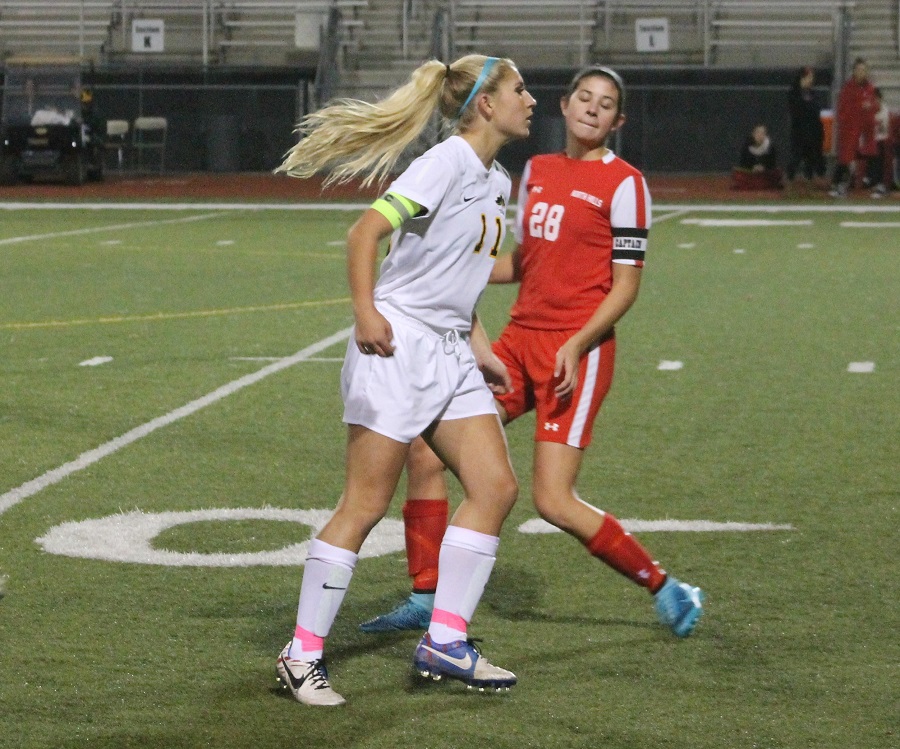 On senior night, North Allegheny senior Gabby Smychynsky fittingly scored the game winning goal in double overtime to propel the Lady Tigers to a 1-0 win over the North Hills Indians on Wednesday night.  The win, NA’s fourth in overtime this season, earned the Tigers a share of the Section 2-AAA crown for the second time in the last three years.

Entering last night’s contest the Tigers had won 12 consecutive games against North Hills and had already locked up a playoff berth. While North Hills has never reached the WPIAL playoffs in girls’ soccer, the Indians did their best to throw a wrench into the Tigers’ section title plans.

North Allegheny controlled the pace for the vast majority of the game and outshot the Indians, 13-4. However, thanks to the play of goalie Allison Traynor and defenseman Samantha DeFrancesco, the Indians managed to hold off the high-powered Tigers throughout regulation.

In the first overtime, senior Marina Thornton had a chance early but missed wide with her shot on net. Shortly thereafter, North Allegheny had its 15th corner kick of the match and senior Morgan Treser, who played a terrific game defensively, headed the ball wide as the contest stayed scoreless. Freshman Alex Adams drove a hard shot from 12 yards out but Traynor stopped the line drive, sending the game to a second overtime.

Needing a win, not a tie, to clinch a share of the section title, North Allegheny finally drove home the game winner in the 2nd minute of double OT when Hannah Anderson found Smychynksy who caromed a shot off the left post and into the net for a 1-0 Tigers victory.  For scoring the game winning goal, Smychynsky was named the Wright Automotive Player of the Game.

The win improves North Allegheny to 12-2-1 overall and 10-2 in Section 2-AAA. The Tigers are unbeaten in their last 10 games. North Hills slips to 3-10-2 overall and 2-8-1 in section play. Fifth-ranked North Allegheny hosts top-ranked Canon-McMillan on Monday at 5:30 pm.