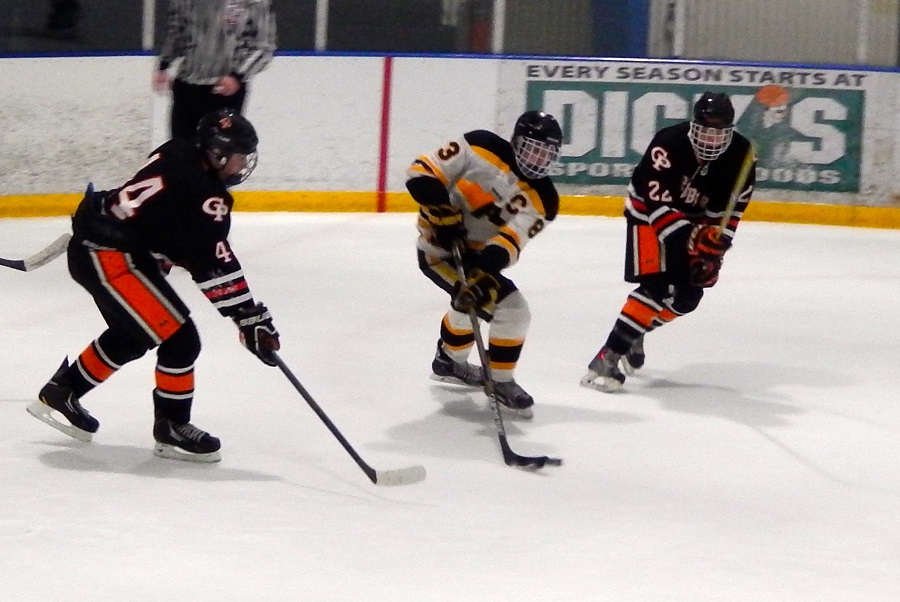 The North Allegheny ice hockey team nearly pulled out another playoff thriller but playing in their third consecutive overtime game the Tigers fell in the PIHL championship to the Erie Cathedral Prep Ramblers, 4-3. Pat Kelly netted the game-winning goal to give the Ramblers their second straight PIHL title and first in Class AAA.

The ice was tilted heavily in Cathedral Prep’s favor in the early going as the Ramblers outshot the Tigers, 18-5, in the first period. Despite the one-sided nature of the period, Tigers goalie Joe Hubert stopped everything that came his way and the game remained scoreless going into the second period.  Hubert made 32 saves in the game while Jacob Kusharski of Prep stopped 24 pucks.

The Ramblers finally solved Hubert in the second period and took a 2-0 lead on goals by Doran Okan and Dillon Elliot. Undaunted, North Allegheny answered back with goals by William Carr and Joe Zappia to even the score at 2-2.

In the third period, Nick Trageser put Erie Cathedral Prep back on top, 3-2, with a goal with just 4:41 remaining. Still trailing by a goal with a little over a minute left, the Tigers pulled the goalie and found the equalizer on a Zappia marker with 1:20 left in regulation to send the game to overtime.

North Allegheny has made a living on overtime wins in the playoffs this season but this time it was Cathedral Prep that pulled out the victory as Kelly scored a power play goal with 1:08 to play in overtime to give the Ramblers a 4-3 win. Prep advances to the Pennsylvania Cup Championship game on Saturday.