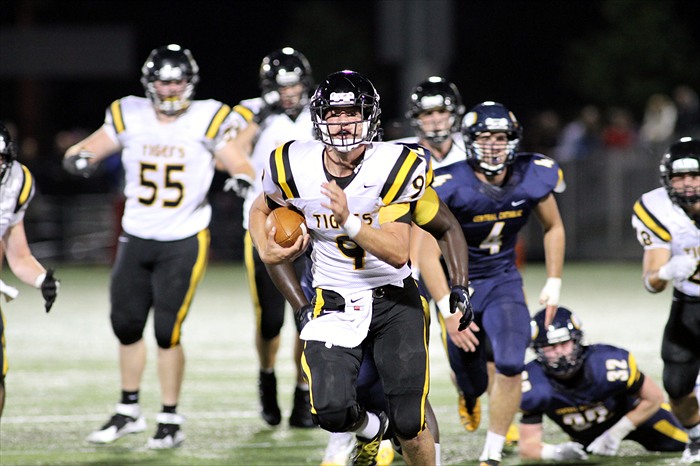 Despite only 49 yards of total offense in the first half, the North Allegheny football team seemed poised to take a 7-0 lead into halftime Friday night against defending WPIAL champion Central Catholic.

That’s when Central Catholic wide receiver John Petrishen made a play that changed the complexion of the key conference clash.

Petrishen made a leaping 33-yard touchdown grab on fourth-and-17 with just 42 seconds remaining in the first half. That catch, coupled with 21 third-quarter points, propelled the Vikings to a 28-7 victory at Highmark Stadium. The win improved Central Catholic to 3-0 on the season, 2-0 in the Northern Eight; North Allegheny fell to 1-2 both overall and in conference play.

The Central Catholic defense proved stingy all night, holding the Tiger offense to just 80 total yards—31 in the second half. On the flip side, the Viking offense finished with 289 total yards, 226 of which came on the ground.

Particularly in the first half, the Tiger defense did its best to slow the Central Catholic rushing attack. Senior linebacker Jonny Sumpter led that charge, finishing the contest with 10 total tackles, including two for a loss. For his efforts, Sumpter earned the honor of Wright Automotive Player of the Game.

Senior quarterback Jeff Clemens led the Tiger offense with 40 yards through the air and 39 yards gained on the ground. Senior running back Josh Bergman added 35 yards gained on 11 carries. Senior wide receiver Clay Byerly hauled in one catch for 26 yards.

North Allegheny now turns its attention to the fourth of a difficult four-game stretch to begin 2014. The Tigers return home to Newman Stadium next Friday to take on non-conference foe Upper Saint Clair. Kick off is set for 7:30 p.m.

For a photo gallery of NA at Central Catholic, click here.