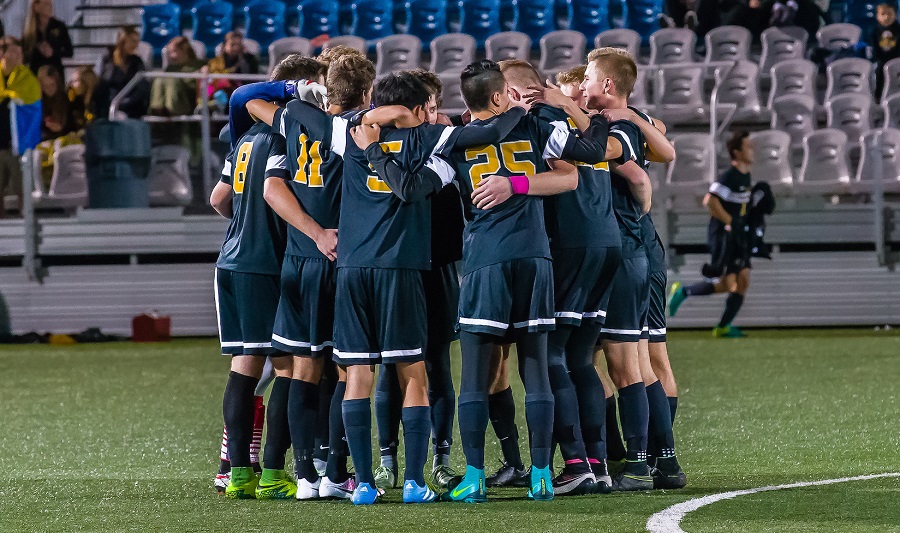 The skillful possession game of the District 1 runners-up kept North Allegheny off balance in the first half. Conestoga peppered NA goalie Grant Glorioso with nine shots on goal in the opening half but each time the junior net minder denied the Pioneers to keep the game scoreless at the half. The Pioneers outshot the Tigers in the first half, 9-1.

In the second half, North Allegheny played inspired ball and nearly scored on a shot by senior Owen Leonard thirty seconds into the half but the try missed wide left.  Just minutes later, senior Jack Passodelis had an opportunity but his shot missed wide right.

The Tigers controlled the pace in the first eight minutes of the half but Conestoga broke that momentum with a header by Nick Jennings to give the Pioneers a 1-0 lead with 31:37 on the clock. Jennings’ goal came on the second rebound in a flurry of shots on net by the Pioneers.

Despite the deficit, North Allegheny continued to pressure Conestoga and tallied an open shot for junior Sean Atwater courtesy of tic-tac-toe passing. However, the attempt by Atwater was stopped by Pioneers goalie Luke Smith to keep the score at 1-0. With six minutes remaining, Josh Luchini hustled for a ball in the right corner and centered a pass in front of a yawning net but the pass was just beyond the toe of Leonard on the doorstep. Conestoga held off NA’s furious attempt at a rally for a 1-0 victory and a date with District 3 runners-up Elizabethtown in the PIAA title game on Saturday at 6:30 p.m.

For a terrific 2016 season, the North Allegheny seniors were named the Wright Automotive Players of the Game. The Tigers end the campaign with a 17-3-5 record. Congratulations to the Tigers and head coach Bobby Vossmaer for a memorable season.