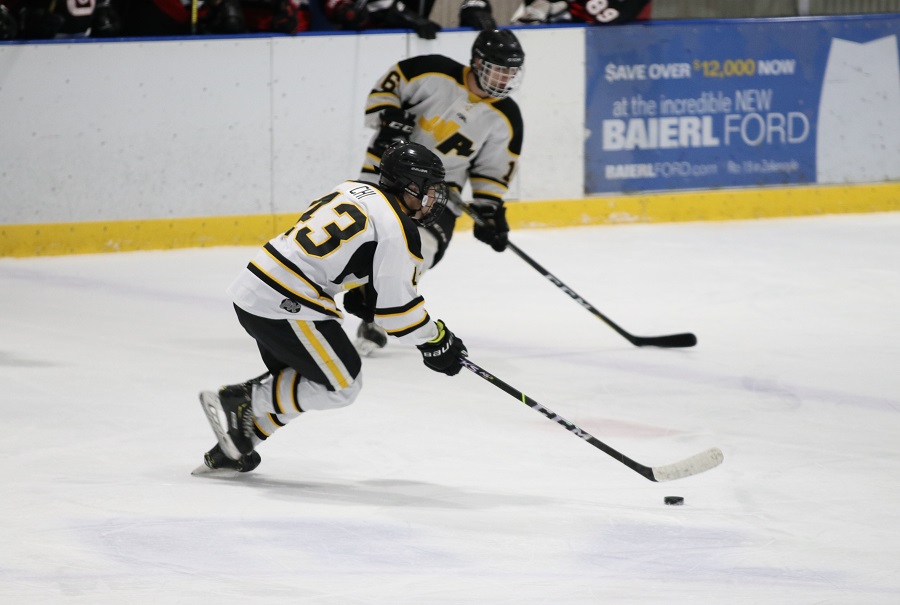 Junior Connor Chi’s hat trick and five-point night spearheaded a North Allegheny victory over Butler on Monday night, 7-2, at the Baierl Ice Complex in Warrendale. Two of Chi’s goals sparked a key four-goal avalanche in the third period that buried Butler. For his efforts, Chi was named the Wright Automotive Player of the Game.

It was Chi’s first goal that opened the scoring in the first period, a power play marker with 5:22 remaining in the stanza. With just 31 seconds to go in the opening stanza, junior Kevin Hart netted his first goal of the season to improve the NA advantage to 2-0.

Junior Luke Washabaugh assisted on the first two goals of the night, but he tallied one of his own on a great backhand deke on the doorstep at the 4:57 mark of the second period for a 3-0 lead.

A minute after Washabaugh’s power play goal, Butler began to rally back with a goal by senior Aidan Potochny, trimming the NA lead to 3-1. With 1:28 to go in the second period, the Golden Tornado’s forecheck produced a steal and goal by sophomore Brady Bauer, cutting the score to 3-2, Tigers.

Following intermission, North Allegheny returned to the ice reinvigorated and scored just 30 seconds into the third period. Sophomore forward Matthew Irvin created a steal behind the Butler net and feathered a pass to Chi at the top of the crease, who cashed in for a goal and a 4-2 Tigers lead. Irvin and Chi collaborated on the next goal at the 6:14 mark of the third, increasing the NA advantage to 5-2. North Allegheny put the game away on goals by junior Nolan Colinear and sophomore Austin Peterson down the stretch to bring the final score to 7-2, Tigers.

With the win, North Allegheny improves to 4-1 and sits in first place in the Class AAA standings. Butler falls to 0-5 and remains in last place. The Tigers will host Cathedral Prep on Thursday night at 9:00 p.m. The contest will be broadcast live via the internet by the North Allegheny Sports Network.