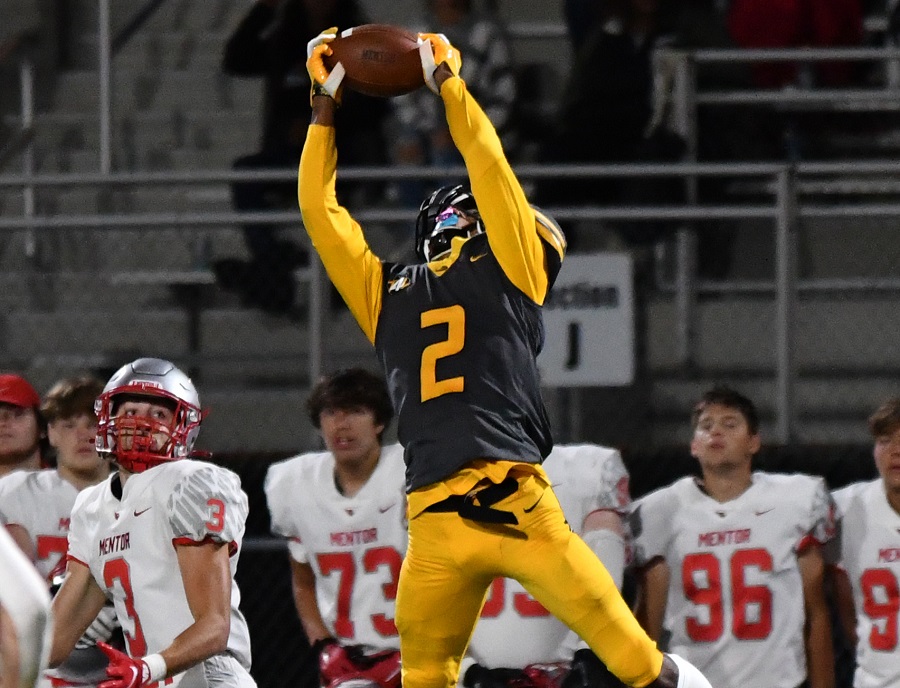 In a featured non-conference game, the Tigers took on another Ohio powerhouse in the Mentor Cardinals on Friday night. North Allegheny gutted out a 20-16 win on a beautiful Friday night in front of 5,000 fans at Newman Stadium.

North Allegheny started the game with a big play when Kyrell Hutcherson returned the opening kickoff to the 48-yard line and got the momentum rolling in the Tigers favor. North Allegheny drove down to the 5-yard line but settled for a 30-yard field goal from Harron Lee for a 3-0 lead. Mentor responded with a 74-yard drive of its own and capped the possession with a Brandon Panhorst 5-yard touchdown. Things calmed down until 8:42 remaining in the second quarter when Mentor kicker, Matt Moegling initially missed a 32-yard field goal, but a delay of game gave him another try and he hit a 37-yard field goal and Mentor went into the half 10-3.

Mentor got the ball to start the second half and began to put a drive together. Threatening inside the 30-yard line, North Allegheny got the Cardinals into a 3rd & 11. Scotty Fox’s pass was tipped by Nathan Spak and intercepted by Dwayne Taylor who took it 90 yards to the house for the Tigers and the game was tied 10-10.

With Mentor’s offense reeling, the Tigers came up with another huge turnover when Hutcherson picked off Fox and returned the ball to the 4-yard line. The offense finished off the drive with a Tanner Potts 1-yard run to give the Tigers a 17-10 lead. The Cardinals put another drive together but it once again stalled. This time Moegling missed a 25-yard field goal wide right and the Tigers kept the momentum. North Allegheny, however, turned the ball over on a fumble at the Tigers 32-yard line giving the Cardinals another chance. Mentor reached into the bag of tricks running a flea flicker and scored on a 40-yard pass from Fox to Mike Norwood. It appeared that the game would be deadlocked but Moegling hit the upright on the extra point and the Tigers maintained a slim 17-16 lead.

With 2:40 left, North Allegheny looked to milk time off the clock when J.R. Burton broke loose a 68-yard run to get the ball inside the 5-yard line. North Allegheny got another field goal from Lee to make the game 20-16. The Tiger defense came up big again to deny the Mentor offense on its final possession and North Allegheny grinded out a 20-16 win.

Jacob Porter and Will Sheridan were menaces off the edge as Porter finished with 11 tackles and  Sheridan totaled seven stops. Offensively, Burton was the team’s leading rusher with 79 yards on five carries. Potts carried the ball 18 times for 65 yards and a TD. Hutcherson was named the Wright Automotive Player of the Game with a game-turning interception.

North Allegheny improves to 2-1 overall and will begin conference play next week when they head to Baldwin.