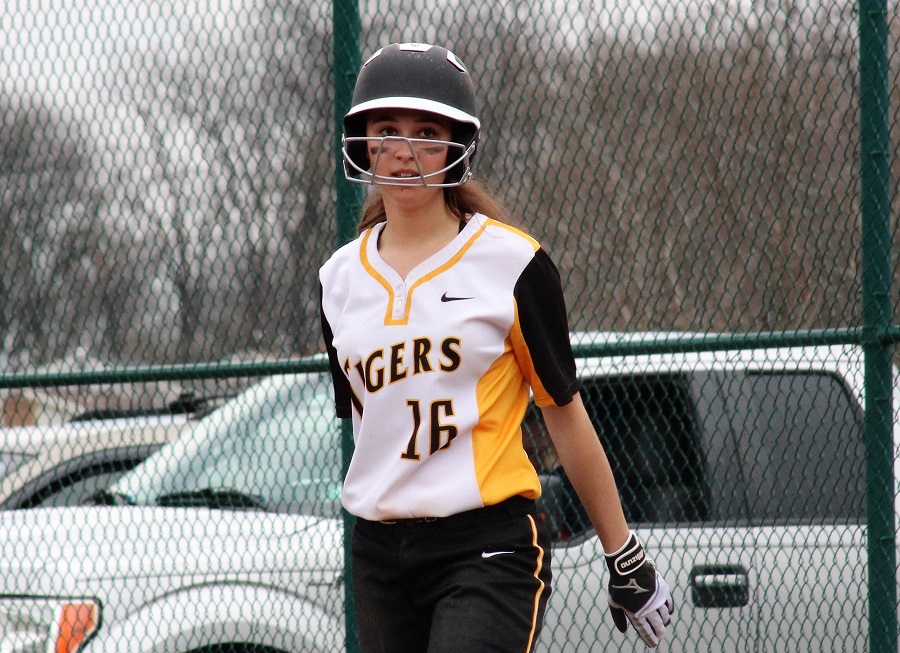 Senior Maddy DeRubbo’s two-out, two-run single broke a seventh-inning tie and lifted North Allegheny to a 5-3 win at Shaler in the 2017 Section 3 opener on Monday afternoon at Hilltop Field. DeRubbo collected three hits on the day, all singles, on her way to Wright Automotive Player of the Game laurels. Sophomore pitcher Brooke Serbin (1-1) scattered seven hits in a complete game victory for the Tigers.

North Allegheny and Shaler shared the section title a season ago, splitting the regular season series and each finishing with a 13-1 section mark. In this early season showdown between section rivals, it was Shaler who jumped out to an early 1-0 lead courtesy of a solo homer by senior Lauren Miller in the bottom of the first inning. The Titans used another long ball to extend the lead, a solo shot by senior Lindsey Lakatos in the bottom of the fourth inning, to bring the score to 2-0.

Shaler starter Lily Buckshaw induced eight ground ball outs and two double plays in the first four innings but ran into a North Allegheny buzz saw in the fifth inning. The Tigers opened the frame with a single by Kristen Chomos, followed by a single by Sophia Dollard who was substituted for by pinch-runner Morgan McVay. Junior Shannon Hamm delivered an RBI single to plate Chomos, cutting Shaler’s lead in half at 2-1. Continuing the Tigers hit parade was junior Dana Manz who posted an RBI single to score McVay, and thanks to a Shaler throwing error, Hamm scored as well to give NA a 3-2 advantage.

The Titans answered back in the bottom of the fifth with a two-out RBI single by Taylor Jones to even the score at 3-3. The contest remained tied until North Allegheny took the lead for good in the seventh.

As she did in the fifth inning, Chomos sparked the seventh inning with a leadoff single. Dollard delivered a double to put runners at second and third with nobody out. Attempting to wiggle out of the jam, Buckshaw recorded a shallow flyout and a weak groundout to keep runners at second and third with two outs. That set the stage for DeRubbo’s clutch two-out, two-run base hit to score Chomos and Dollard for a 5-3 North Allegheny lead. Serbin closed out the win with a scoreless bottom of the seventh to secure the victory.