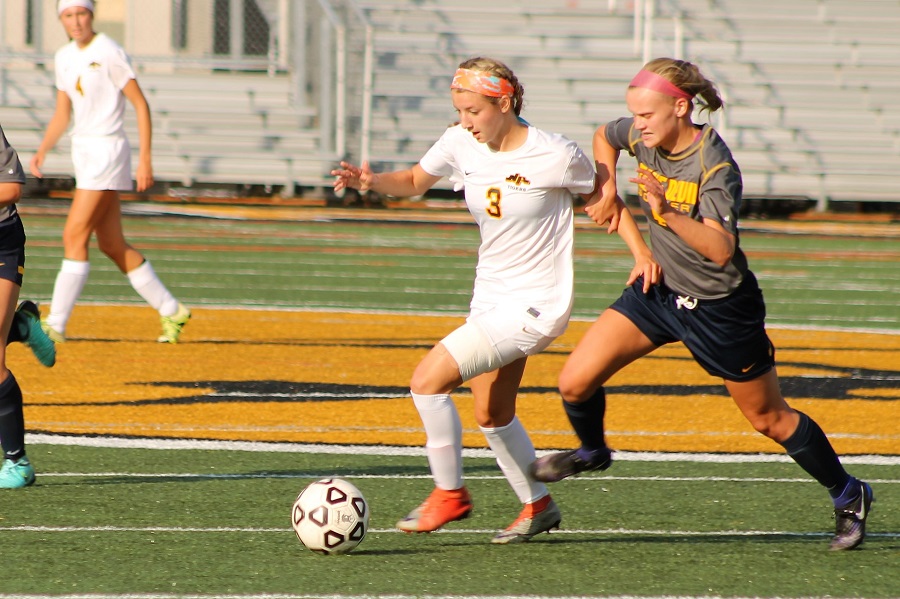 Emma Bundy’s goal with 5:55 to play in overtime lifted North Allegheny to a 1-0 victory at North Hills on Wednesday night at Martorelli Stadium. It was the second time this season the Lady Tigers have played in an overtime game, capturing a victory in both contests. NA also seized a victory in extra time on September 11 with a 2-1 overtime win against Seneca Valley.

North Hills entered the game with just one section win but playing in a driving rain storm the homestanding Indians were hoping to put a damper on the Tigers’ attempt at a late-season surge. North Allegheny had the better of the play in the first half but North Hills nearly took the lead in the 25th minute on a free kick by Olivia Yoder from 25 yards out that hit the crossbar and bounced away, keeping the game scoreless.

The Tigers had their best opportunity to score in the waning seconds of the first half when North Hills keeper Grace Lyon misplayed the ball at the top of the box and Bundy came away with a steal. With only Yoder to beat, who was scrambling back toward the net defensively, Bundy missed on her attempt wide right and the contest remained 0-0 at intermission. Despite the missed shot, Bundy would be heard from again.

North Allegheny dictated the pace for most of the second half but was kept off the scoreboard because of the fine play of Lyon in the North Hills net. Lyon denied several prime scoring opportunities for Ava Ruppersberger and Alex Adams over the final 40 minutes of regulation.

In overtime, the Tigers raised their intensity level and were finally able to beat Lyon when Bundy delivered the game-winning goal with 5:55 on the clock. For her efforts, Bundy was named the Wright Automotive Player of the Game.

Goalies Julia Correa and Olivia Ruppersberger combined for the shutout. It was the seventh shutout posted by the Tigers this season.

North Allegheny improves to 10-5 overall and 6-3 in Section 1-AAAA. North Hills finishes its section schedule with a 1-9 mark and sits at 5-11 overall. The Lady Tigers will visit Pine-Richland on Saturday night at 7:00 p.m.