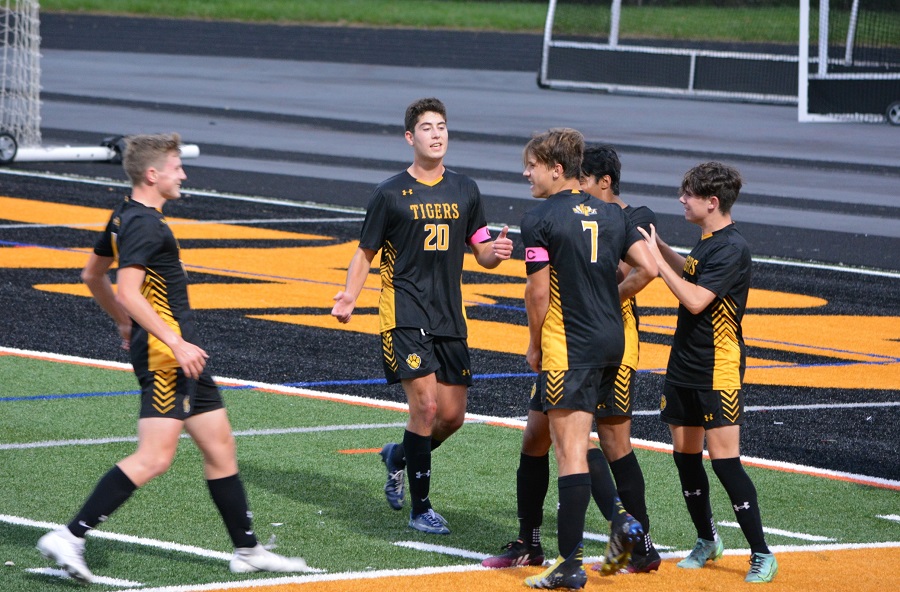 On a cloudy night at Newman Stadium, the NA strikers forced the Butler backline into several errant passes throughout the night. One such miscue resulted in the game’s first goal when Anderson stole a pass and scored with 27:55 remaining in the half for a 1-0 lead.

The Tigers had the better of the play in the opening half, however, the strong throw-ins from Butler senior Carson Knight was a weapon that the Golden Tornado took advantage of in the final minute of the half. With a throw-in from the right sideline and 15-yards out, Carson Knight heaved the ball in front of the NA net and senior Jack Beneigh scored on a leaping header into the top left corner of the net to tie the game at 1-1 with 37 seconds left before halftime.

With time winding down in the half, North Allegheny senior Matt Mihm nearly gave the Tigers the lead back just moments after the Beneigh goal. Mihm raced past the Butler defense into the goal box but Golden Tornado goalie Noah Wolford charged out of the net to cut down the angle and Mihm narrowly missed wide left. The score remained deadlocked at 1-1 at intermission.

In the second half, Butler appeared to take the lead on another strong throw-in from Carson Knight. This time, Knight’s throw-in bounced on to the toe of Aidan Soley, who tapped the ball from the doorstep into the back of the NA net. However, Soley was ruled offsides on the play and the game remained tied, 1-1.

After weathering the early second half storm from the Golden Tornado, North Allegheny continued to pressure the Butler backline with its forwards and forced a tide-turning turnover. Anderson stole a goal kick from Golden Tornado goalie Drew Knight and scored his seventh goal of the season with 29:25 remaining in regulation, lifting the Tigers to a 2-1 lead. For his efforts, Anderson was named the Wright Automotive Player of the Game.

With 17:50 left to play, the Tigers put the game away when sophomore Daniel Stevens sent a shot on net that was initially saved on a diving play by Drew Knight. Knight couldn’t control the rebound, however, and junior Gabriel Gotz pounced on the loose ball for an easy goal and a 3-1 North Allegheny lead.

Without the services of all-state forward Landon Mohney, who missed the game due to a lower body injury, Butler was unable to muster any consistent offense and NA prevailed, 3-1. Sophomore goalie Dante Accamando needed only to make three saves to earn the victory.