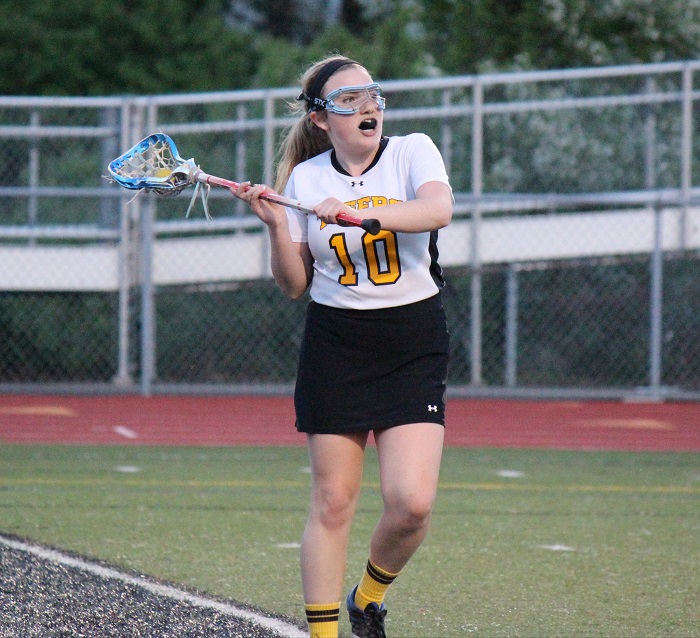 A natural hat trick in the second half by Maggie McClain helped the Sewickley Academy Panthers top the North Allegheny Lady Tigers on Tuesday night, 10-7, at Newman Stadium.  The Panthers kept their playoff hopes alive with the Division 1, Section 2 victory and put a North Allegheny post-season berth on hold.  Needing only one more win to reach the playoffs, the Tigers still have two more chances this week with home games against Pine-Richland and Seneca Valley. NA can also reach the playoffs with one of a combination of losing scenarios for Fox Chapel, Sewickley Academy and Seneca Valley.

On senior night, North Allegheny’s lone senior made a major impact early in the contest. Attack Rena Ferrara scored two of her three goals on the night in the first 10 minutes of the game as NA and Sewickley battled to a 2-2 tie with 15:28 on the first half clock. For her efforts, Ferrara was named the Wright Automotive Player of the Game.

In a tightly officiated game, the Panthers took advantage of numerous free position opportunities and scored three straight goals to grab a 5-2 lead with 5:28 remaining before halftime.  Markers by Rylee Vacarrelli, McClain and Natalie Wei were part of the Panthers run. The Tigers edged back when Maddie Black scored on a beautiful feed from Julia Butteri with 4:51 left in the half. Isabella Cottone trimmed the score to 5-4, Panthers, with a tally with 57 seconds before intermission.

In the second half, McClain, the top scorer on the season for the Panthers, asserted herself with three straight goals and an 8-4 Sewickley advantage. Including her first half goal, McClain ended the evening with an impressive four-goal performance.

Again, the Tigers fought back by scoring three of the next four goals to bring the score to 9-7, Panthers. Cottone scored two of NA’s second half goals and Ferrara netted another.  Both finished with hat tricks.

After Cottone’s third goal, which came with 8:57 to play, freshman goalie Katie Shideler made five terrific saves to keep NA within striking distance. However, the Tigers could not come any closer as Sewickley played keep away for the next seven minutes and put the game on ice on a goal by Maddie Braksick with 1:41 on the clock. Braksick’s goal brought the game to its eventual final, 10-7, Panthers.

North Allegheny slips to 6-6 overall and 5-5 in section play. Sewickley Academy improves to 4-9-1 overall and 4-6-1 in Division 1, Section 2. The Tigers will try to lock up a playoff berth on Thursday against the Pine-Richland Rams.  The game will be broadcast live via the internet on the North Allegheny Sports Network.  Opening faceoff is slated for 7:30 pm.