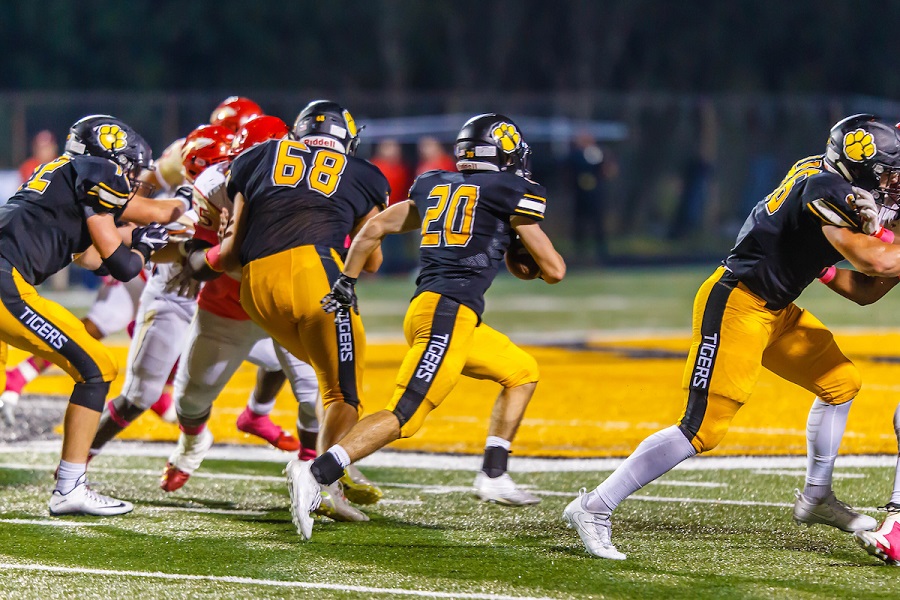 Fiery Effort By NA Falls Just Short Against No. 1 Pine-Richland

In an offensive showcase, the Pine-Richland Rams outlasted the North Allegheny Tigers for the Northern Seven Conference title on Friday night, 48-28, at Newman Stadium. The two teams combined for 1,108 yards of total offense and 45 first downs. Pine-Richland’s Jordan Crawford and Kenny White both rushed for over 200 yards and produced an evening full of big plays to help the Rams lock up the top seed in the upcoming Class 6A playoffs.

Midway through the second quarter, Kenny White busted loose for an 81-yard touchdown to increase the Pine-Richland lead to 21-7. Just before halftime, North Allegheny marched 54 yards on seven plays courtesy of a power running game that was sparked by change-of-pace back Ben Maenza. Maenza carried the ball six times for  50 yards on the drive and scored on a 6-yard run to cut the score to 21-14, Rams. Maenza finished with 73 yards and averaged 8.1 yards per carry.

North Allegheny had the football first in the second half but was forced to punt. Pine-Richland quarterback Phil Jurkovec, who was held to 74 total yards in the first half, busted loose for a 69-yard touchdown run with 8:15 on the third quarter clock for a 28-14 lead. Jurkovec concluded the game with 178 yards rushing and two touchdowns.

Despite the deficit, the Tigers continued to fight back and manhandled the Rams defensive front for another lengthy drive. Senior tailback Turner White was the primary battering ram on an 11-play drive, carrying the ball six times for 31 yards to set up a play-action pass by Luke Trueman to tight end Brennan McCauley for a 9-yard touchdown. The Trueman to McCauley connection brought the score to 28-21, Pine-Richland with 3:54 remaining in the third period. Turner White posted his third 100-yard rushing performance of the season with 104 yards on 21 carries. For his efforts, Turner White was named the Wright Automotive Player of the Game.

Following the Turner White touchdown, Pine-Richland responded with a quick drive that ended on a 10-yard touchdown run by Jurkovec to balloon the lead to 35-21. Showing great resolve, the Tigers once more answered the call and used a fake punt to convert on a 4th and 9 from their own 21-yard line late in the third quarter to spark an 80-yard drive. The possession was punctuated on another great gadget play from head coach Art Walker, a 21-yard halfback pass from Turner White to John Vardzel to make it a 35-28 ballgame with 10:06 remaining in the fourth quarter.

While the Rams defense couldn’t solve the Tigers offense, the Pine-Richland offense continued to carry the team on its back. Kenny White scored his third rushing touchdown of the game, a 4-yard scoring run with 6:48 remaining, for a 41-28 advantage. The Rams missed on the point after touchdown.

On the ensuing possession, North Allegheny marched to the Pine-Richland 17-yard line before a Crawford sacked Trueman and forced a fumble that was recovered by Andrew Kristofic with 3:57 left to play to effectively lock up the win. Pine-Richland capped the scoring with a 46-yard touchdown run by Crawford for a 48-28 victory.

For North Allegheny, the loss snaps a six-game winning streak and brings the Tigers record to 7-3 overall and 4-2 in the Northern Seven Conference. Pine-Richland improves to 10-0 overall and 6-0 in the conference. Both teams will prepare for the WPIAL playoffs next week.