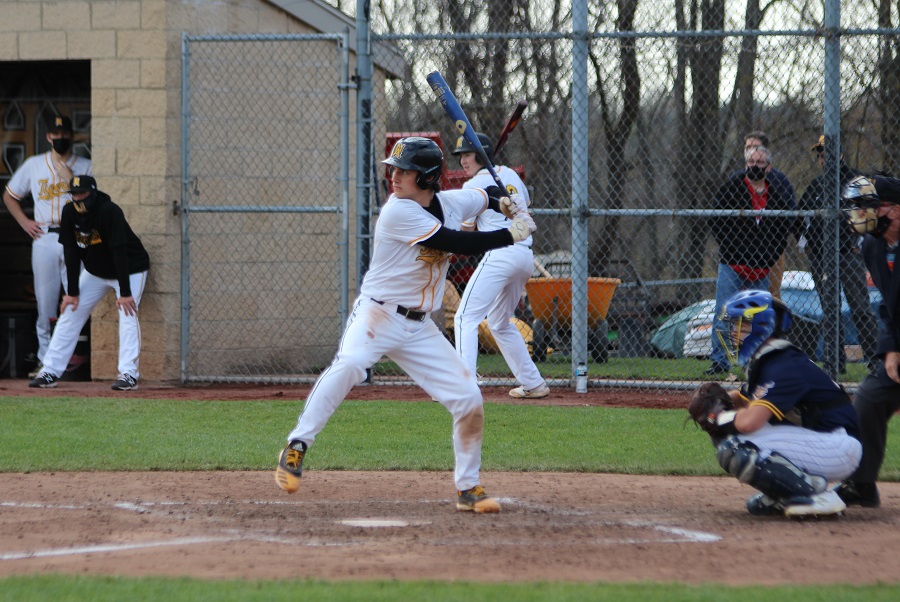 On the strength of a five-run first inning, the North Allegheny baseball team completed a two-game sweep of the Central Catholic Vikings on Tuesday afternoon with an 8-3 section victory at home.

The Tigers sent nine men to the plate in the first inning against Vikings starter Austin Winkleblech and cashed in for an early 3-0 lead on RBI singles from Danny Gallon, Joe Manesiotis and Spencer Barnett. Aaron Galaska added a two-out, two-run double to open up a 5-0 NA advantage.

Winkleblech was chased from the pitcher’s mound following the first inning and Central Catholic turned to Nick Robertson out of the bullpen. The right-hander slowed the Tigers attack in his 4.2 innings, but did serve up a solo home run to Barnett in the third inning, improving the NA lead to 6-0. Posting a 3-for-3 afternoon with two RBI, two runs scored and belting his second home run of the season, Barnett was named the Wright Automotive Player of the Game.

North Allegheny starter Kyle Demi (4-0) retired the first nine batters he faced, striking out five of those nine, but did allow two runs to the Vikings in the fourth inning. Pat Deluca drove in a run with an RBI single and later scored on a wild pitch, bringing the score to 6-2, North Allegheny. The two unearned runs were an aberration for Demi, who stuck out nine batters in five innings and walked only one to earn his fourth victory of the season.

The Tigers tacked on a pair of insurance runs in the bottom of the sixth inning thanks to an RBI triple by Cole Young and an RBI single courtesy of Gallon, giving NA an 8-2 lead after six innings. Gallon reached base four times in the contest, going 3-for-3 with three singles, two RBI, two runs scored and a walk.

Central Catholic attempted to rally in the seventh inning and scored one run on an RBI double by Joe Pilewski. However, a 6-4-3 double play and a fine defensive play by Gallon and reliever Joe Lang to combine for a 3-1 putout of Eli Harpalani ended the ballgame and closed out an 8-3 win. Lang pitched the final two innings for NA and permitted only one run on one hit.

With their seventh consecutive victory, the Tigers improve to 9-1 overall and 5-1 in Section 1-6A. Central Catholic falls to 6-5 overall and 2-5 in the section. North Allegheny will visit Hampton on Thursday for a non-section contest at 3:45 pm.