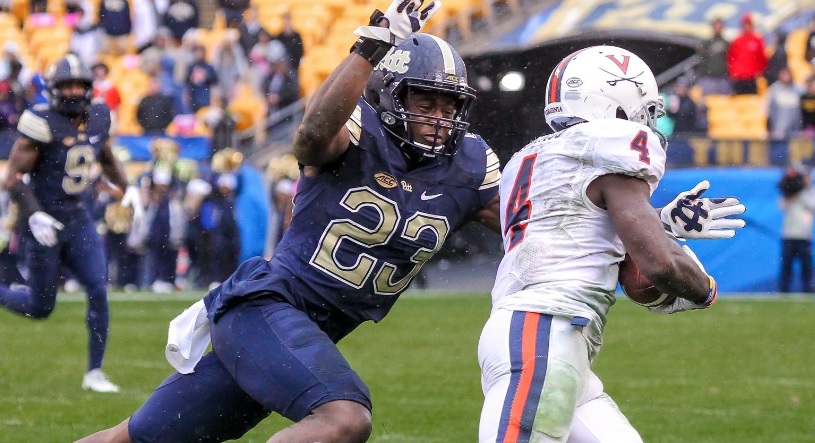 Idowu was one of 51 players nationally named a candidate for the prestigious award, mirroring the No. 51 that the award’s namesake, Dick Butkus, wore during his Hall of Fame career. The Pitt standout was one of just six ACC linebackers chosen for the watch list.

A local product from North Allegheny in Wexford, Pa., Idowu’s journey at Pitt began as a training camp walk-on at safety in 2014 and is now set to culminate with his senior season as a nominee for one of college football’s most esteemed awards.

After redshirting during his first year with the Panthers, Idowu played in 10 games during the 2015 season as a special teams ace and also transitioned into a reserve role at linebacker.

Since earning a scholarship during camp in 2016, Idowu has solidified himself as one of Pitt’s starting outside linebackers each of the last two seasons.

Idowu played in 13 games with 12 starts at Star linebacker during the 2016 campaign, finishing third on the team with 74 tackles. He also added two tackles for loss and two forced fumbles, helping the Panthers knock off Penn State and Clemson on their way to an eight-win season and a berth in the New Era Pinstripe Bowl.

Last season, Idowu established himself as one of the ACC’s top linebackers. In 2017, he started all 12 games for the Panthers and earned second team All-ACC selection from the media after leading Pitt in tackles (94), TFLs (11.5) and sacks (five).

The Butkus Award, which was created in 1985, will announce its semifinalists for the 2018 recipient on October 29, while finalists will be selected on November 19.

A 51-person selection committee will choose the winner of the 2018 Butkus Award, which will be announced on the live ESPN telecast of The Home Depot College Football Awards on December 6.