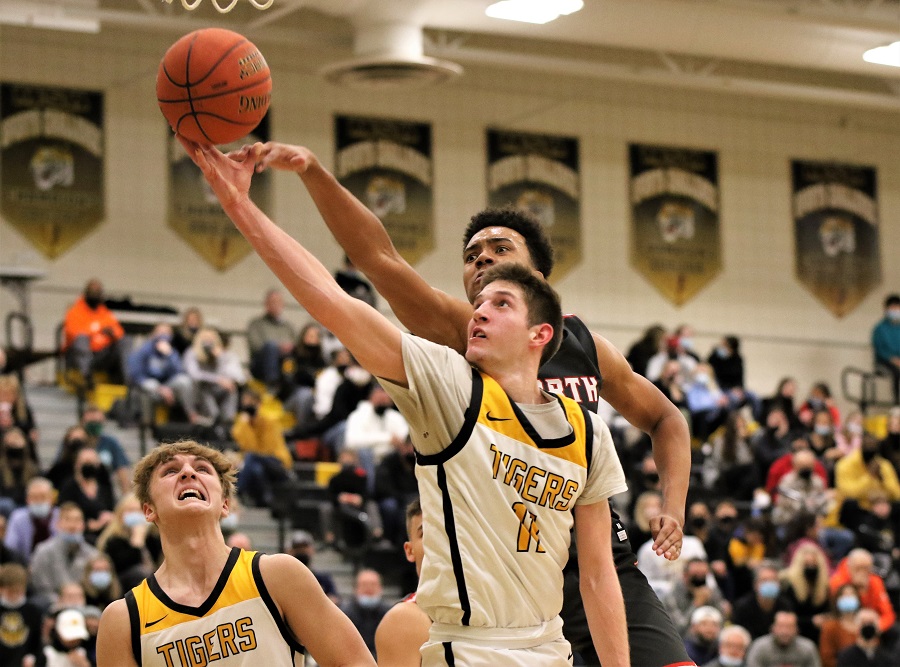 A furious fourth quarter rally by North Allegheny fell just short on Friday night as Butler survived the Tigers, 86-79, in a Section 1-6A contest. The Tigers trailed by as much as 13 points in the second half and fought back to tie the game twice in the final minute. However, a 3-pointer by Madden Clement with 32 seconds remaining and crucial free throws down the stretch allowed Butler to prevail.

In the first half, North Allegheny took a 13-8 lead in the first quarter before a 15-2 run by the Golden Tornado allowed the visitors to take a 23-15 advantage.

With Butler leading 25-19 to start the second quarter, the Tigers flipped the script with a 12-2 run that was capped on a 3-pointer by Erik Sundgren for a 30-27 lead near the midway point of the period. Seniors Kyrell Hutcherson and Kolin Dinkins sparked North Allegheny in the first half with 13 and 10 points, respectively. Hutcherson ended the night with 17 points and Dinkins totaled 12.

In the remaining minutes of the half, Butler and NA traded baskets with the Golden Tornado holding a narrow 41-38 lead at intermission.

Thanks to a game-high 32-point effort from Elon University commit Devin Carney, Butler built a 59-46 lead in the third quarter. Clement finished with 21 points and senior Raine Gratzmiller added 16 points for the Golden Tornado.

Butler maintained an 11-point advantage for most of the final stanza and held a 77-66 lead with 2:30 left in the game. Undaunted, North Allegheny went on an 11-0 run and tied the score at 77-77 on a Joey Dopirak layup with 1:05 remaining. Senior Matt McDonough, who was held to three points in the first half, exploded for 22 points in the second half to lead the charge. For his 25-point night, including five 3-pointers, McDonough was named the Wright Automotive Player of the Game.

After Dopirak tied the game, Carney immediately put Butler back ahead with a pair of free throws for a 79-77 Butler lead. On North Allegheny’s next possession, the Tigers once again looked to the inside for Dopirak who evened the score at 79-79 with 49 seconds left to play. Dopirak finished with 12 points on the evening.

With the game deadlocked, Carney missed a 3-pointer but an offensive rebound by Braylon Littlejohn set up Clement for an open shot from the perimeter and an 82-79 lead for the Tornado with 32 seconds left in regulation. The Tigers missed a 3-pointer on the ensuing possession and Butler put the game out of reach in the waning seconds at the free throw line for an 86-79 victory.