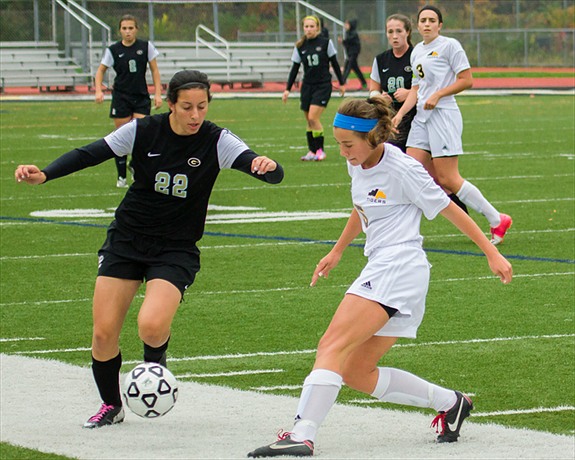 For the second straight season, the Gateway Gators upended the North Allegheny Girls Soccer Team in the opening round of the WPIAL playoffs, this time with a 2-1 victory at Newman Stadium. Last year the Gators were the favorite at home in Monroeville, but on Saturday afternoon Gateway topped the third-seeded Lady Tigers in a stunning upset.

North Allegheny controlled the action and possession throughout most of the first half, and the game for that matter, and limited the Gators to just four shots on net.  However, Gateway wasted little time in gaining a 1-0 lead thanks to a goal by Kayla Trozzi in the game’s 2nd minute.  North Allegheny senior net minder Madison Martin made a terrific save midway through the half to keep the deficit to one goal, and the score remained 1-0 at intermission with the Gators willing to limit their offense by playing defensive minded soccer.

In the second half, North Allegheny found the equalizer when senior Alexa Mermigas fed a pass to sophomore Amanda Miller for a goal in the 20th minute to bring the score to 1-1.  Miller’s marker came on a nice header for NA’s lone tally, earning her Wright Automotive Player of the Game honors.

Despite NA’s continued domination of possession, Gateway managed to trickle home the game winning goal in the 35th minute on a tally by Hannah Feinberg to give the Gators a 2-1 upset win.

North Allegheny’s season ends with a 15-3-1 record, while Gateway improves to 10-7-1 overall and will face the Bethel Park Black Hawks in the quarterfinal round of the WPIAL Playoffs on Wednesday night.