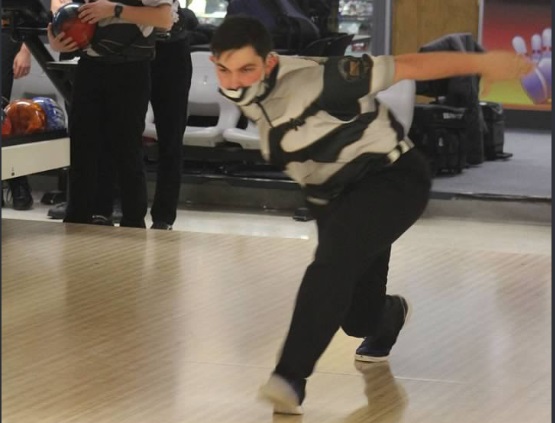 The home of the Butler Golden Tornado should be renamed “Tornado Alley.”  Family Bowl-A-Way adjacent to Butler High School is a formidable venue and can cause apprehension in all who enter.  Like its namesake, this tornado alley is synonymous with inhospitable conditions and with visitors being tossed about.  A large number of spectators were on hand to see the #1 and #2 teams of the WPIBL North meet head-to-head for a second time this season.  The first place Tigers entered the competition on a 15-match win streak stemming back to the 2021 season.  Butler has only suffered one loss this season with that loss being given by the North Allegheny Tigers.  Out of the 53 teams in the WPIBL, NA sits at #4 and Butler at #5.

Fresh from their victory last Friday, the Tigers started the hunt in stealth mode.  Senior Gavin Rush threw the first double in game 1 followed quickly by senior Jeb Jorden.  Senior Marc Sostmann was next in the attack throwing a double in frames 2 and 3.  The Tigers then went on a rampage with senior Noah Sostmann adding a four-bagger and sophomore Cole Scott doing one better with a Yahtzee in frames 3-7.  M. Sostmann took over the hunt again with a four-bagger of his own.  The Tigers were on pace to set a record score for game 1.  But that was when Family Bowl-A-Way, an unpredictable venue, slowed the attack.  The oil tracked down the lane and the Tigers shots went high and heavy resulting in numerous splits.  Jorden was able to add another double in frames 8 and 9, but the damage from the four splits was done, no high game records would be set today   The Tigers were still able manage an 87-pin victory over the host team 1018-931, led by Marc Sostmann (226), Noah Sostmann (213), Cole Scott (202), and Jeb Jorden (199).

Both teams continued to battle with the changing oil pattern in Game 2.  Whoever could figure out how to finesse a string of strikes was going to win the second game.  Scott and Jorden started off with the necessary adjustments each adding a turkey to the team total.  Rush added a double, then Jorden, and Noah Sostmann.  Marc Sostmann add a Yahtzee and the Tigers had the game and match in hand.  Not going down without a fight, Butler banded and amassed an assault of their own.  Back pedaling from Butler’s quick blows, the Tigers were off balance and unable to focus.  Although a small wound, the Tigers faltered in the final frame of the match and let victory slip away, 870-905.  Still on the leaderboard were Marc Sostmann and Jorden with a 210 and 206, respectively.

For the second time in as many matches with Butler, the Tigers were on the verge of defeat.  Whoever would win Game 3, would win the match.  Anytime NA has been in this position so far this season, they came out strong and took an early lead in Game 3.  This behavior continued.  Rush led the way as he did in game 1 with a double.  Jorden followed.  Is this déjà vu?  Could this be a reenactment of game 1?  Noah Sostmann added a string of 6 strikes (wild turkey), and his brother Marc added his second Yahtzee of the match.   NA made a substitution and junior Will Graham joined in the battle with a double.  Rush added another.  However, the Butler Golden Tornado had whipped up a storm of strikes of their own and bested the Tigers 981-1022.  Butler had stolen the match out from under the prowl of the Tigers.

When the dust settled, however, the Tigers still had reason to celebrate.  Marc Sostmann sat at the top of the leaderboard with highest three games series of all the bowlers.  Joining him from NA were Jorden (597) and Noah Sostmann (594).  Most importantly, the total pin count for the match still favored NA, 2869-2858.  Butler earned 4 of the 7 match points, giving NA three points.  With the head-to-head series tied at one match a piece the tiebreaker comes down to match points earned.  In the first match NA won 5-2.  After the second match, the match points still favored the Tigers 8-6 over Butler.  NA remains in first place in the section.

NA is back on the lanes at 3:00pm this Wednesday and Thursday.  Wednesday’s match versus Deer Lakes will bring the boys and #2 Girls Team in the WPIBL to Perry Park.  On Thursday, the Shaler Area Titans will raid Perry Park Lanes.  If the boys’ team can hold off the Titans they will win the WPIBL North Section title.