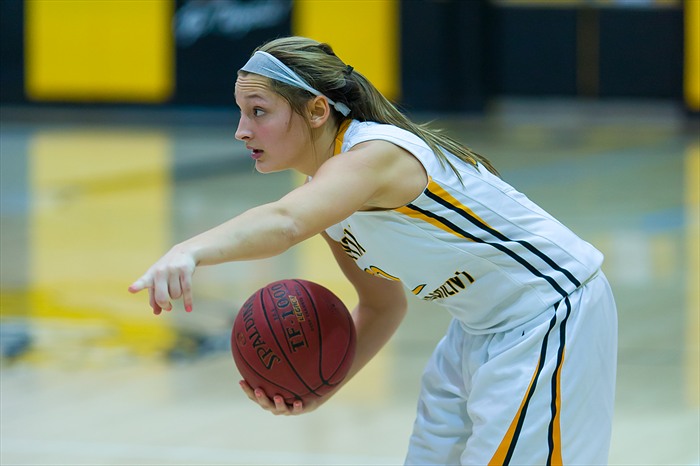 Winning their ninth game in a row, the North Allegheny Lady Tigers grabbed sole possession of first place in Section 3-AAAA with a convincing 58-34 triumph over the Pine-Richland Rams on Monday night.  The Tigers controlled the tempo of the game and forced 20 turnovers, converting the majority of them into points.  NA held an additional edge on the glass, outrebounding the Rams, 33-23.  Ten of the Tigers rebounds were of the offensive variety.

The game was tied 4-4 in the early moments, but NA rolled off a 13-3 run to end the first quarter for a 17-7 lead.  The pace of the game was dictated in the opening stanza by Tigers point guard Abby Gonzales who frustrated the Rams with her defense and facilitated the NA offense with beautiful passes to her teammates.  Gonzales scored nine points, dished out nine assists, and collected four steals.  For her efforts, Gonzales was named the Wright Automotive Player of the Game.

Thanks in large part to the passing of Gonzales, and the rebounding of Taylor Lake and Meg Morningstar, the Tigers took a 30-24 lead into the locker room at halftime.  Lake and Morningstar combined for 13 rebounds in the game.

When NA faced Pine-Richland earlier in the season, the Rams outscored the Tigers 24-8 in the third quarter en route to a 66-58 win on December 15.  In Monday night’s rematch, the game was again won in the third quarter but this time it was the Tigers who heavily outscored the Rams, 17-0. Pine-Richland didn’t score its first bucket of the second half until 7:35 remained in the fourth quarter.

Pine-Richland point guard Amanda Kalin, a D-I soccer recruit, collected her fourth foul of the game with 6:08 to play in the third quarter.  With the talented guard on the bench for most of the quarter, the Rams were helpless against an avalanche of North Allegheny points.

While Kalin ended the game with a very respectable 18 points for PR, the rest of the Rams’ offense was dormant. North Allegheny traded buckets with Pine-Richland in the fourth quarter and earned an important 58-34 Section 3-AAAA victory.

The Tigers are now 13-2 overall and 6-1 in section play.  Pine-Richland falls to 13-3 overall and 5-2 in the section.  NA will try to make it 10 straight wins on Friday night with a home game against the Butler Golden Tornado. Tip-off is set for 7:30 pm.