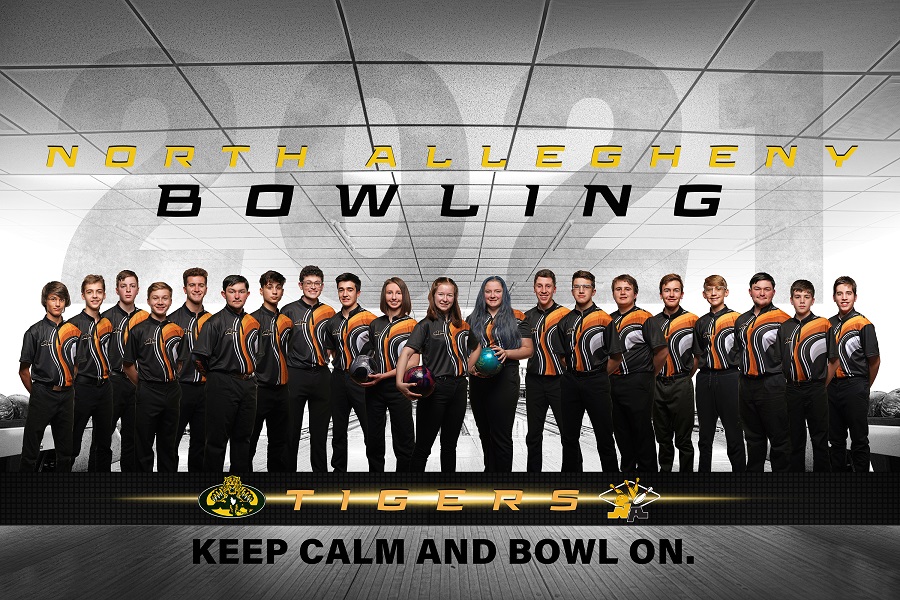 Home Away from Home

The NA Tiger Bowling Team made an unprecedented turn today and relocated their home match to another venue.  Due to the recent move of all NASH students to remote learning, all sporting activities involving the Senior High students were cancelled for the past few days.  As a result, NA’s final home bye match that was previously scheduled for yesterday, Friday, February 5 was cancelled.

To prevent any possible future cancellations, The Tigers were able to secure some lane time at Pines Plaza Lanes in Ross Township.  The Tigers bowled their final regular season match alongside the Junior Bowling Program at Pines Plaza.

The early morning Saturday match did not seem to faze the Tigers, as they got right down to business.  The lanes were freshly oiled, so the Tigers made their adjustments early on, switching to bowling balls engineered for heavy oil conditions.  Once the correct equipment was chosen, it then boiled down to technique.  The Girls team recorded their 4th victory of the season and finish the 2020-2021 season with a record of 4-6.  Leading the Lady Tigers today was sophomore Katrina Price and junior Morgan Maughan.

The NA Boys team was led by senior Dylan Scheidler who bowled his highest game of the season, a 278. Ten out of 12 attempts resulted in strikes.  In the rare occasion when all the pins did not fall with the first throw, Scheidler was able to convert the spare with the second.  Senior Joey Lydon was also fresh from the get-go, earning first game honors with a 210.  Junior Gavin Rush added to the pin count with a 196.  After Game 1, North Allegheny had knocked over 1020 pins.

Almost as fast as the machines could set them up, the Tigers continued to knock over the pins in Game 2. “All for one and one for all” became the motto for the Tigers during this second game as they worked together to reach their game goal of 1000+ pins.  Scheidler (233) served as the leader of The Three Musketeers.  Joining him again at the top of the leaderboard was Lydon with a 218 and Rush with a 212. Like the classic novel, there is actually a fourth musketeer.  Senior Andrew Cook took on this role with his 198.  The Tigers achieved their goal after hitting down 1035 pins in Game 2.

As NA entered the final game of the regular season, it was the senior leaders again that rose to the top.  Each senior threw seven strikes in their final game.  Lydon, Scheidler, and Cook, finished with a 224, 220, and 205, respectively.  Joining the upperclassmen, junior Marc Sostmann threw eight strikes in the final six frames to end the match with a 257.  North Allegheny collected 1096 pins in the third game and finished the day with a count of 3151.  For the season, NA achieved 1000+ pins 16 times, with 7 of the 10 matches eclipsing 3000+ pins.

After the match, the Tigers took time to reflect on this year’s accomplishments and the leadership provided by the three graduating seniors that led the varsity program this year.  These same young men as sophomores were an integral part of the novice team that finished the WPIBL Team tournament as runners-up.  A little over two years ago, the NA Bowling team entered the WPIBL Team tournament as underdogs not expected to rival some of the best teams in Western PA.  They qualified third through the preliminary round of 18 and finished the tournament in second place, losing the last two Baker games, each by only one pin, to Franklin Regional.

Fast forward two years.  Now as they move into post-season play, the 10-0 (29-1 in game play) NA Tigers are one of the highest ranked Boys teams in the WPIBL averaging 1004 pins per game.  Moreover, the Tigers were also able to qualify 6 bowlers to the WPIBL Singles Tournament.  Joining Scheidler, Lydon, and Cook is fellow senior Alexis Robinson, and juniors Jeb Jorden and Gavin Rush.

The NA program has many underclassmen eager to follow the path created by these graduating seniors.  However large the footprints, the future looks bright for the Tigers.