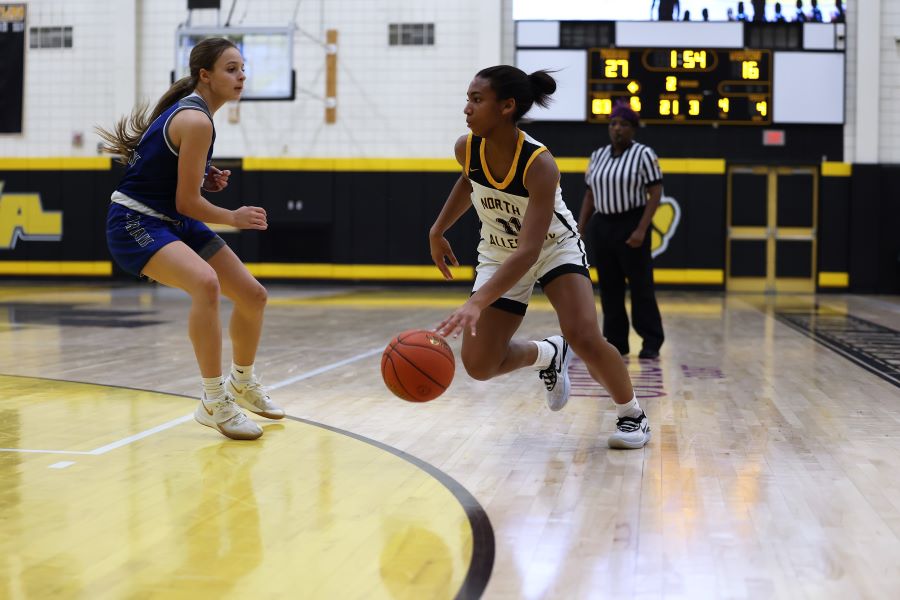 Senior Jasmine Timmerson scored 14 points to give herself 1,000 career points on the dot as the North Allegheny Tigers coasted to a 59-44 win over the Hempfield Spartans on Thursday night at UPMC Health Plan Court.

North Allegheny blitzed the Spartans at the start scoring the first six points of the game. Following a timeout, Hempfield settled in and start to hit some shots and eventually tied the game at 12-12. Cam Phillips hit a three-pointer at the buzzer to give the Tiger a 15-12 lead and momentum heading into the second quarter. NA would start to pull away in the second frame outscoring the Spartans 17-7 in the period. The Tigers got a huge lift from Caroline Henderson who had all 15 of her points in the first half hitting five threes, and North Allegheny took a double digit lead of 32-19 into the second half. Henderson would lead the Tigers in scoring on the night.

The defense kept the intensity up in the third quarter as they held Hempfield to single digits once again and Phillips hit another buzzer beater to end the third and the Tigers had a 20 point advantage, 46-26, heading into the fourth quarter. As NA was coasting along in the fourth quarter, with four minutes remaining, Timmerson hit a corner three to give the Tigers a 56-36 lead. The three pointer gave Timmerson 14 points in the game and 1,000 points in her career as North Allegheny finished off a 59-44 victory. For her efforts, Timmerson was named the Wright Automotive Player of the Game.

Kellie McConnell added 11 points for the Tigers and Phillips and Eva Prenatt each had eight points. Hempfield’s Sarah Podkul led all scorers with 17 points.

North Allegheny improves to 9-4 overall and 4-1 in section play. Hempfield falls to 7-9 overall and 1-4 in the section. The Tigers will return to UPMC Health Plan Court on Saturday afternoon as they will take on District 10 foe McDowell, that game will tip off at 2:30 p.m. and will be carried live on the NA Sports Network.